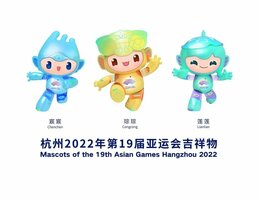 The mascots were designed by Zhang Wen and Yang Hongyi.[3] The three are robots, whose designs are influenced by a mix of tradition and modernity. The official designs of the mascots practicing sports was unveiled on 2021.[4]

The three robots represent landscapes of the city of Hangzhou: