CZ75 is a character from the Tactical SRPG ES game Girls' Frontline and its derivatives developed by MicaTeam and published by Digital Sky. She joined the fray on 30 March, 2017.

The Česká zbrojovka Uherský Brod, or CZ UB, has been manufacturing firearms for military and law enforcement use since 1936, along with precision instruments, aircraft parts and engines, among other services. The CZ 75 remains a renowned weapon among all the products the company has ever built. Though a pistol manufactured by an Eastern Bloc country with few outstanding design features, it combines the advantages of many pistols, with comfortable grips, reliable action, good accuracy, and high-end (though not state-of-the-art) quality, all at a moderately positioned pricing level, making it a popular weapon in the west, in addition to being replicated into different models.

The CZ 75 was developed by brothers Josef and Frantisek Koucky when they designed a standard-issue pistol with a double-action trigger and a high-capacity magazine according to Central Government's mandates. Though the Czech Republic was a Warsaw Pact member, the weapon was still ordered to be chambered in 9mm Parabellum cartridges.

The Koucky brothers combined advantages found on the Browning Hi-Power, the S&W M39, the SIG 210 and other pistols, and eventually came up with the CZ 75 semi-automatic pistol in 1975. Production commenced in 1976, and was issued to Czechoslovakian soldiers and police officers alike, with exports to other countrys afterwards. It was first exported to Middle American states and the Scandinavian countries through an export company named Merkuria, before expanding its market to other countries.

There was virtually no pistol designed by a socialist state on the Euro-American market during the Cold War, that is, until the CZ 75 made its appearance. It was first welcomed due to it being a novelty and its low price; however it was found that the CZ 75 was reliable to use as a military weapon, but with a high accuracy for shooting competitions, plus that it has a low price, making it a highly cost-efficient pistol.

The CZ 75 family of pistols use a short-recoil system. The barrel has a locking lug under the chamber, which works in coordination with the locking part found on the receiver. The barrel is locked in the slide with two locking lugs found on the top, in front of the extraction port.

Most variants of the CZ 75 are single/double-action, with a manual safety on the receiver and an exposed hammer. All CZ 75 pistols from the late 1980s onwards have an automatic firing pin safety installed, with a letter "B" added to their model name, as found on the CZ 75B. Newer models have a de-cock lever in the stead of the manual safety, such as the CZ 75BD and the CZ 75 P-01. Other models are double-action only without manual safeties, and use a smaller-sized hammer (CZ 75 DAO). In addition to some single-action only models with manual safeties on the receiver made for IPSC competitions (CZ 75 BSA). The manual safety lever or the de-cock lever is located on the left side of the receiver, the same side on which the slide catch is located on all models. Another ambidextrous operation-capable model, renamed the CZ 85, has manual safety levers and slide catches on both sides of the receiver to support ambidextrous operation.

All standard-sized CZ 75 pistols have all-steel structures, with molded slides and receivers. While some more compact models such as the CZ 75 P-01 uses a steel slide and an aluminum receiver.

The CZ 75 is also one of the earliest 9mm-caliber pistols to use a staggered-column high-capacity magazine after the Browning Hi-Power, but with a smaller grip size for use by small-handed users, with excellent ergonomics providing comfortable gripping in use. The grip can be either walnut or plastic. The pocket model of the CZ 75 has the same receiver as that of the CZ 75, but with a 20mm (0.78 in) shorter slide and barrel. The compact models have a shorter grip, with a magazine capacity of only 13 rounds (15-round magazines are accepted on these models, however they protrude from the bottom of the grip).

The early models of the CZ 75 use 15-round magazines, with current models using 16-round (9mm standard-sized), 12-round (.40-caliber) or 13-round (9mm compact) magazines. Magazines with a 10-round capacity are also sold to the North American civilian market.

The barrel is hammer forged with 6 right-hand twist riflings, at 1/9.7.

The CZ 75 has a rather complex firing mechanism, which, combined with manufacturing problems, make the trigger rather stiff to users, which is a main shortcoming of the CZ 75, with another being that it is uneasy to disassemble or modify, with trigger mechanism adjustment by oneself being advised against if there isn't adequate experience and confidence.

The standard model of the CZ 75 comes with fixed iron sights, while "tactical" or match models are equipped with adjustable ones.

Some of the CZ 75's variants include:

Judging from the shape of the hammer, the character wields what appears to be a standard CZ 75.

Specialized models exist, such as the IPSC competition model, the CZ 75 Kadet converted for small-caliber training use, and a machine pistol variant capable of full-auto firing.

The CZ 75 is being sold in 70 countries and regions worldwide, and is welcomed by law-enforcement and security agencies and civilians alike.

The CZ-75 is widely replicated with some of the most prominent models being:
The Italian Tanfoglio series
The Israeli IMI Jericho 941 (market as the Baby Eagle in the US market until 2008 despite having no connection with the Desert Eagle)
The Swiss ITM AT-84
The Swiss Sphinx series
The Turkish Kılınç 2000
The American Springfield P9 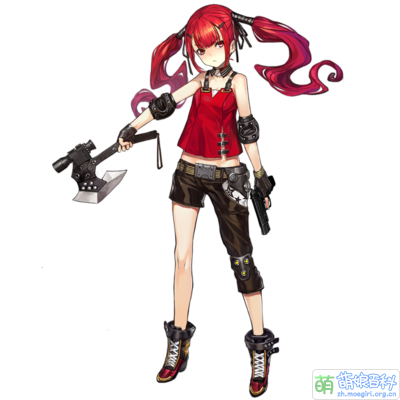 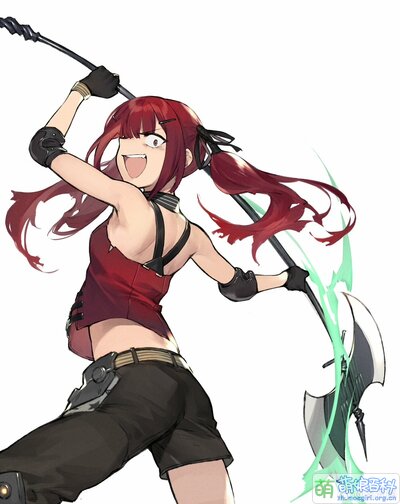 Not-so-Careful players may have found out that the axe on CZ-75's right hand has an ACOG optical sight attached to it.

And there was a punchline back in August 2016 on the internet that read:

I. A story about communication:

Somebody:
"Hahaha, someone commented on having designers down the line design a throwing axe in a gaming-industry channel"
"Says that it can be used for throwing and melee alike."
"But the thing is, with the sense of a ranged weapon when wielded."
Result: 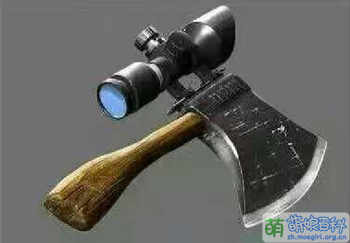 And preceding this punchline is an episode of Battlefield Friends, a fan-animation series of the Battlefield series, in which a knife with bipods and a hammer with optical and laser sights appeared.

This line mainly pokes the fact that the CZ-75 has a rather stiff trigger due to the complexity of its firing mechanisms.

Though with a flat-shaped figure, what she's been referring to is actually the trigger force.

For commanders who thought about a certain body part, please face the wall as a self-punishment, while for those who thought "Oh, bad handling, let me try" and prepared for harrassment, brace yourselves as an axe is on its way.

The CZ 75 is sold in over 70 countries and regions worldwide and is welcomed by civilians and law-enforcement agencies alike. Due to numerous political reasons, the CZ 75 did not have a global patent protecting its design, therefore spawning a great many of CZ 75 replicas.

For example NZ75, Bren Ten who joined the array of T-dolls early on,

and Spitfire who reported in rather lately.

It may be inferrable that since the CZ 75 has a rather bad handling experience, the NZ75 and the Bren Ten perhaps won't be better much. (NO!!)

But the trigger force problem is more or less remedied when countries worldwide are replicating the weapon.

But why did Spitfire have a taller, slimmer and perhaps better body profile than the others? ..... 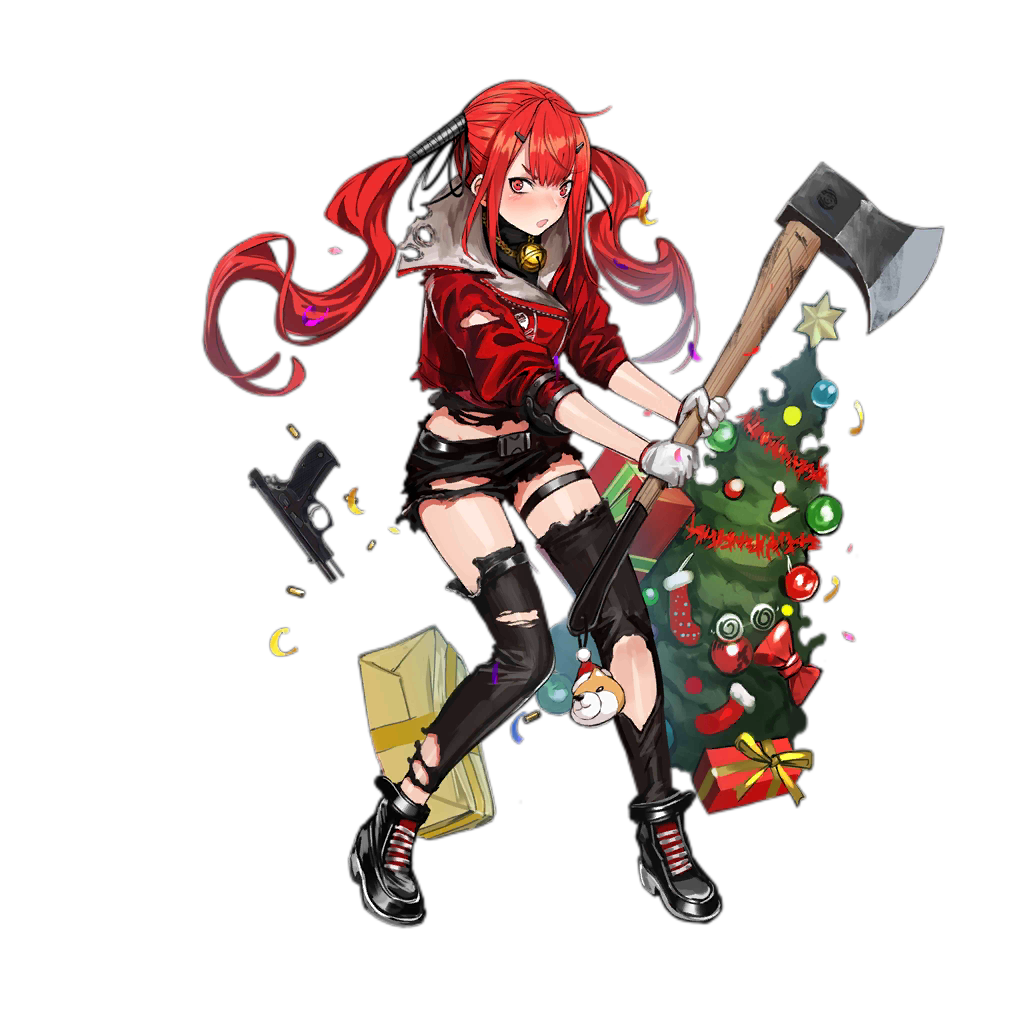