M4A1 is a character from the Tactical SRPG ES game Girls' Frontline and its derivatives, developed by MicaTeam and published by Digital Sky.

M4 carbine is the shortened version of the M16 assault rifle developed by Eugene Stoner. It is employed by militaries and police forces worldwide.

The design of M4 carbine traces back to the early carbine versions of M16 and the XM117, both derivatives of the CAR-15(which has disputed meanings, and commonly refers to the many carbine versions of the Colt AR-15, however, technically, this only stands for the CAR-15 weapons system by Colt in the 1960s) by Eugene Stoner. Employing the same gas block, air-cooled barrel and a rotating bolt, as well as a box magazine and a selective fire function, the M4 has its barrel shortened to 368.3mm, making it lighter and shorter than the M16, enabling the shooter to acquire the target faster in close-range combat. The M4 and the M16 have 80% of their parts exchangeable.

The M4A1 has a thicker, heavier barrel. However it was found that the barrel had a tendency to overheat easily, with the handguard reaching temperatures unsuitable for contact by hand after only 6 magazines are expended while on full-auto. The aluminum insulation layer and the handguard was subsequently thickened. The first version of the M4 provided to the US army had only a semi-auto and a 3-round burst mode, and was changed to a semi-/full-auto after special forces expressed their dislike of the limiting mechanism of the M4. Both the M4 and the M4A1 employ the 5.56mm SS109 (M855) NATO round (with the US army using the improved M855A1, and the marines using the Mk318), and uses the gas-operated rotating bolt action found on the M16.

The handguard of the M4 is rather short, with a 368.3mm barrel, around 140mm shorter than that of the M16A2. It uses a telescopic stock, with the extended position supporting aimed firing, and the retracted position supporting hip-firing. The sling is attached to the sides of the M4, unlike that of the M16A2/A4, which is attached to the underside of the weapon, making it easier for patrolling soldiers to ready their weapon.

The M4 has 2 types of sights available. Optical sights are mainly used in the daytime, designed to replace the mechanical sights found on the M16A2, with the reticle being a red chevron pointing to the bullet's impact point at a set distance. Thermal sights on the other hand uses the heat signature of the targets to acquire the target. In addition to these, a calibration device is also developed for the M4, making calibration of the weapon itself or its attachments possible without firing.

The main difference between the M4 and the M4A1 is that, the M4 uses an "S-1-3" (Safe-Semi-Burst) selector, while the M4A1 uses an "S-1-F" (Safe-Semi-Full) trigger group. Early versions have a fixed carrying handle, with the M4 issued to ordinary units, and the M4A1 to special forces. However, this is not the case after May 2014, when the US army started to replace their M4s with M4A1s. This replacement program includes replacing the trigger group to the full-auto configuration, as well as changing the barrel to a heavier, thicker one, together with ambidextrous selector switches.But the marines got their hands on the M4 only recently...... 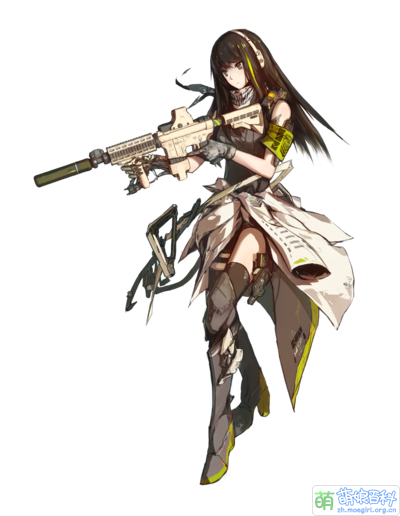 M4A1 is the actual commanding element of the AR squad, with a sensitive, shy personality, a peculiarity unsuitable for a leader. In fact, M4A1 has a soft and a hard side, which she attempts to overcome the sway to become an adequate leader. She is also both the student and a friend seriously? of M16, willing to take care of her team and constantly worries about their safety. "How long will it take, to become the "me" in my heart......" This line is indeed a realistic snapshot of her inside.

The unmodified version of the ancestor of modifications, the Sherman M4, is M4A1. (False)

To indicate this conflicting nature of her, the illustrator used a soft facial profile when designing the character, with few emotional elements, like a "blank girl". But the shemagh with a sharp teeth pattern, the metal prosthetic arm, and a wide variety of tactical attachments show her other side of a capable T-doll in combat. The shirt on her waist, similar to that of M16, also implies the relationship between the two. [3]

If observed carefully, the right little finger of M4A1 is removed to directly connect to the weapon--which is not found on any other T-doll model. The prosthetic arm has a number of variations, to meet the needs of everyday life.

Also worth noting is that, the M4/M4A1 in reality uses the STANAG 4179 30-round magazine more often, while the M4A1 in-game uses a 20-round magazine (with an initial ammo requirement of 20 as well).

AR-15 is the first T-doll and the first friend she met after she was waken.

M4A1 attempted to trade herself for the release of AR-15 captured by Hunter in 3-6 "Hunting prohibited", but AR-15 modified Sangvis Ferri orders from the inside, causing confusion, taking out Hunter in the process.

She found the trail of AR-15 in Episode 6, and went to search with SOP, but was ambushed by AR-15, and was taken after SOP was knocked out. She was found later by M16 and SOP.

Worried constantly about M16 in Episode 4, to the degree that she slapped M16's face when the latter appeared...

Suspected to be jealous of SOP II sticking around the commander in Episode 3.

Aided by SOP II in the Emergency part of Episode 4.

According to her creator, SOP II was originally intended to like M4 very much and stick around her at the same time.

The skill of M4A1, as a result, was changed from "Cover interference"(Lowers the dodge of the current target by 60% for 8 seconds) to "Firepower concentration T", with the effect blocks changing from the AR-effective Keypad 1 to the still AR-effective version.

Compared to self-conscious Sangvis Ferri units, Grifon T-dolls basically have no tactical capabilities, only able to follow orders or generate responses to basic training data (autobattle templates). However, as an officially designated protagonist, M4A1 from the AR squad (of course with RO635) has her own commanding authority and a commanding module (with authorities identical to human commanders), capable of commanding Grifon T-dolls on a tactical level.

M4A1 pushes the plot forward as a main character Passer-by.

From the relentless chase by Sangvis Ferri at the beginning, to AR-15 being asked by the Mastermind who she is, even though M4A1 continuously stated that she was unable to answer, the lines implied that AR-15 and the Mastermind were dire to solve this problem.

AR-15 was not happy to have a new companion judging from the memory segments about the creation of M4A1 from M4A1 herself and AR-15. Because she was boss from her creation?

To that Persica repeatedly emphasized that M4A1 was special, and proposed that Grifon should not put M4A1 on dangerous battlefields.

Her safety directly involves the rest of her squad, and even the 404 squad.

And to the obvious difference of M4A1's attitude and affection towards the commander from those of other T-dolls?

As the plot device pushing the story forward for the time being, M4A1, given so much, could not be just another 16LAB T-doll.

As to the secrets hidden on her, we might as well wait for the official explanation.

A soft and hard girl

Since she was only recently produced, she has a calm personality, with constant downplay of her own capabilities (which is even shown in her voicelines). On the other hand she has deep affections to the AR squad, from the deep worry when M16A1 was stuck in Sangvis Ferri territory, to the near-collapse when AR-15 sacrificed herself with a sea of Sangvis Ferri units. M4A1 showed a hardline side while being soft and weak. Even after her psychology was damaged, Persica attempted to use her Psychology Map to simulate scenarios in an effort to recover her psychology, she still chose to sacrifice herself even after 70 consecutive simulations. Perhaps the line below is M4A1 at her hardest:

“
You shouldn't even mention them, Sangvis Ferri scum.
”

Mounted with a special command module and with special commanding authorities, leading the AR squad, designated as #1 target by Sangvis Ferri when she herself didn't know why. Please, cherish her, as she was but just a soft, weak and a hardline girl surviving in a fight with Sangvis Ferri.