Vector is a character from the Tactical SRPG ES game Girls' Frontline developed by MicaTeam and piblished by Digital Sky and its derivatives.

The Vector is a new submachine gun developed by TDI.

The Transformational Defense Industries (or TDI) first introduced a visually exotic SMG chambered in .45 ACP at the end of 2005, naming it the "KRISS Super V", and it is claimed to be an SMG with extremely low recoil.

The sample weapon fires .45 ACP cartridges. Due to it being full-auto only, and with a staggering rate of fire at 1200 RPM, it was considered ammo-exhausting. The sample weapon used a 7-round magazine modified from that of the M1911A1, depleting the whole magazine in a blink of an eye. Designers soon realized that the rate of fire was too fast for an SMG, prompting them to plan to lower it to around 850 RPM. It was commonly believed that firing heavy .45 ACP rounds at 1200 RPM on a weapon that wasn't even 4 pounds heavy (the MK5 was 3.9 lbs heavy, with the design target around 3 lbs) would create difficulties in controlling the weapon, but the KRISS MK5 was easy to handle. According to those who test fired the weapon, the recoil was even lighter than that of the M1911 pistol.

The weapon is equipped with a 5.5-inch (around 140mm) barrel, with left-hand twist rifling at 16 inches (406 mm). A folding stock is also provided. The weapon comes with a selector capable of adjusting firing modes between single, two-round burst and full auto. An earlier variant with only semi- and full-auto modes was also introduced. The manual safety lever and the selector lever are separate from each other, and support ambidextrous operation. This design was questioned by some test users, especially when it comes to the position of the selector. Though the thumb of the firing hand can operate the safety lever with ease, the selector switch had to be operated with the other hand or by letting go of the grip to reach the lever. This problem was fixed on the second generation of KRISS SMGs, namely the K10, which merged the two levers into one.

Someone with a weird personality, don't talk much with others usually, but very reliable when executing missions, which in addition to her helping others in silence, makes her more or less welcome. (性格有些古怪的家伙，平时不太和别人说话，但是在执行任务时十分可靠，并且会无言地帮助别人，使得她还挺受欢迎的。)

In the art collection THE ART OF GIRLS' FRONTLINE UNTIL THE STARS sold in March 2017, the inspiration for the character of Vector is revealed.

The first time [I] saw the shape of Vector, just immediately thought she would be a silverish-grey-haired, serious and a bit cold girl. Since it's a modern gun, so it isn't something like tactical garments with all the smell of war like that of others, and chose the uncumbersome one-piece dress and short hair, with the main color themes of black and yellow pairing with a clean white blouse, in an attempt to give a clean and smart impression. 第一次看到vector的外形时，就觉得应该是个银灰色头发的、认真又有点冷的少女，因为本身是现代枪，所以服装上看起来不是像其他人那样有战斗感的战术服装，从枪身上提取图形和颜色为元素，选择了不累赘的连衣短裙和短发，主色是黑色和黄色搭配干净的白衬衣，希望能给人清爽帅气的印象。

But the AR-world is quite a mess, with 416 being especially keen on (retaliation towards) M16. To the degree that she would go to break M16's leg if given a break. However, in the voiceline of Vector, the "Prototype" line quickly reminds a lot of commanders about White Album.

An AR of an SMG

Vector boasts high damage and RoF among SMGs, even on par with that of some ARs, making her a veritable AR with considerable durability, which, coupled with the emphasis on output capabilities, raised Vector's position among SMGs. A nuke-pair is also possible if MK416 is paired with her.

Vector's molotov received a huge buff after the ability system's overhaul, raising its damage. And with the introduction of some high-dodge Sangvis units, the molotov of Vector's that guarantees damage and comes with a short cooldown makes her ability one of the most valuable in the game.

And 416's grenade, albeit with a small area-of-effect, has a short cooldown and high damage, with a matching effect-tile with Vector, which makes the pair effective for mass-extermination.

Vector stands a height of around 6.5 heads in her normal illustration, making her someone with a good body figure.

However, it is quickly discovered that Vector not only had smaller breasts but also a shorter height(at around 5 heads, in agreement with the head-shoulder ratio). Her weapon also had a shock-dampening stock .

Following the Halloween Shortening, Vector's wedding dress as part of the "Sweet Oath" in March 2018, suddenly grew to a 9-head height (with a eye-watering body shape).

And the truth is that the dress would be longer if not specified otherwise, and when it comes to taking photos, the heightening with the assistance of objects is relatively common. Plus that it is explicitly mentioned that Vector actually stood on a wooden crate to have her photos taken.

Vector's voicelines are more or less negative to some degree.

And in reality, the Vector's built by an American company, designed by a Swede, and the patent for its bolt traces back to France. It bore much speculation due to its exotic appearance, with even more exotic appearances as it kept getting updated. Though turning heads for some time with its shape and unique action mechanism, most customers still remain skeptical towards the weapon.

With so many ups and downs in its life, with a name-switch of the company and a new name for itself. Eventually, though having impressive designs and performance, the Vector was never favoured by the military or by the civilians due to its high price. It did find a place in films thanks to its futuristic shape, however.

"Though silent but very reliable. Odd personality but quite welcomed." Though described so in the earliest descriptions, what the voicelines reflect is more self-abandoning after all Vector's been through.

Perhaps the line in the "Lone Wizard" event would suit her best?

"We can die for you, but don't think I want it that way. (我们可以为了你去死，但别以为我是心甘情愿这么做的。)"

As the two G&K protagonists of the story in the "Lone Wizard" event, Vector and PP-90 could be called a duo with entirely contrasting personalities. Vector kept on being negative, while PP-90's active to being "so noisy." (per FN57), and Vector was nicknamed "vivi" by PP-90.

And though vivi hated the vivi nickname, FN57 noted at the end of the event that "the whole base's saying it (全基地都这么叫了)". Perhaps vivi accepted this nickname at last, but rather than saying that the event changed her, she might as well just simply gave up the struggle xD

Also inspired by the "Lone Wizard" event, in which vivi talks in a straightforward and sarcastic fashion. As is known to all commanders who watched the plot, vivi commented on that Kiana is an idiot, that she fights better than even T-dolls, and that the head of the academy is pretending to be... even though she's good, and such.

PP-90 commented on this as that vivi has a good sense of humor, while 57 thought her as with "a leaky mouth", that vivi talks too seriously.

As to which it is... It is better to leave it to commanders to decide. 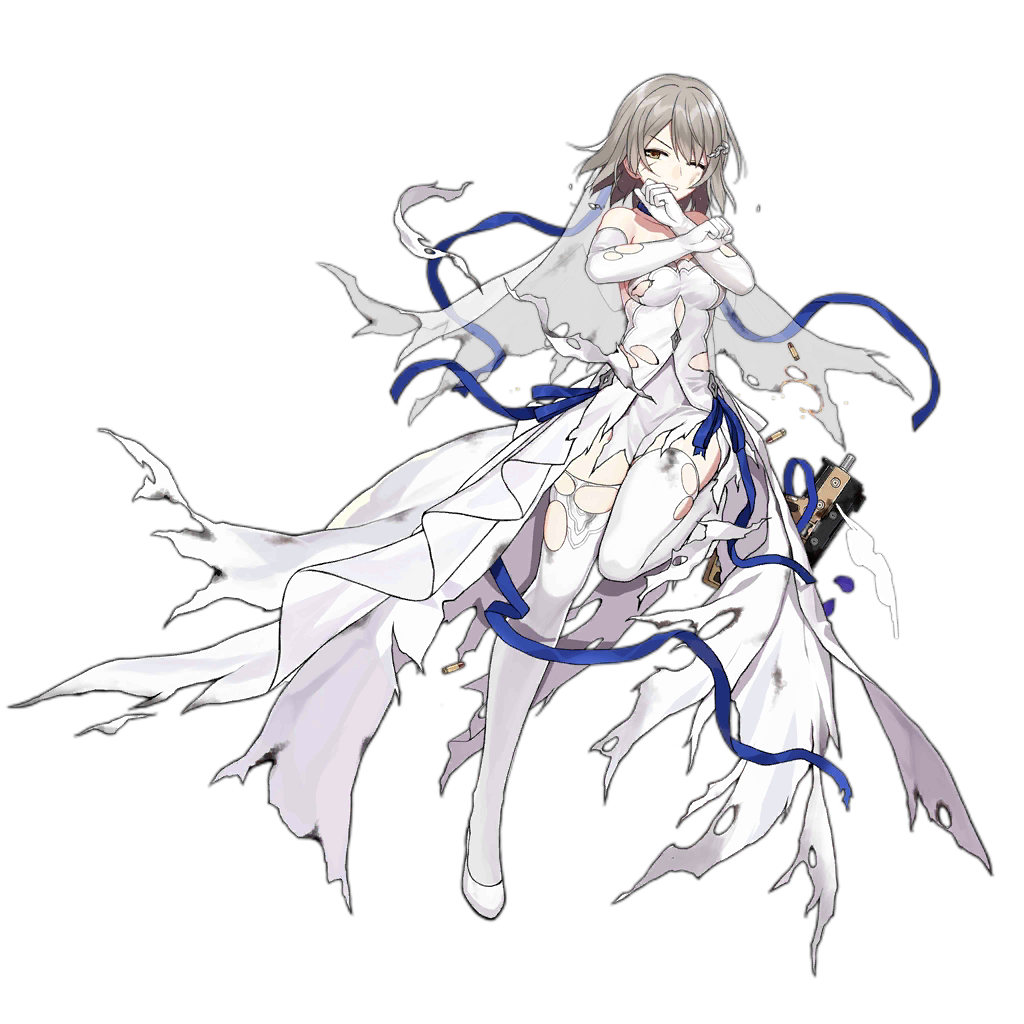