This article is about the heroine of Fate/stay night.
“
I ask of you. Are you my master?
”

Artoria Pendragon (Japanese: アルトリア・ペンドラゴン), also known as Altria Pendragon, is a character from TYPE-MOON's visual novels Fate/stay night, Fate/Zero and its derivative works. She was known as Saber during the Fourth and Fifth Holy Grail Wars.

Fate/Stay night and the first two Fate anime series referred to her as "Saber", so she is usually referred to when "Saber" is mentioned.

She is based on Arthur Pendragon, the ruler of Britain from the 5th to the 6th century AD. In Fate/Prototype, she directly appeared as male. In stay night, however, due to the need to make a galgame, and Saber's Master changes from female to male, in order to highlight the relationship between master and slave, her gender was changed.

Artoria was born in Britain in the 5th century. At this time, the era of chaos and war when the once powerful Roman Empire was on the verge of extinction. This empire was once considered to be invincible and impenetrable, but at that time it could only wait for the fate of being invaded and divided by the barbarians sooner or later. The Roman Empire, preparing to fight the barbarians to the end, abandoned its own territory, Britannia, and withdrew all the armed forces on the island. Once Britannia lost the protection of the empire, it could not escape the cycle of independence, disintegration, and separatism, and it quickly split into several small countries. During this period, the invasion of the barbarians and the mutual conquests between the tribes opened a long "dark age" known to later generations. The continent's empire declined, and the foreigners (Saxons) who lost their restraints began to invade Britain in order to survive.

The first king—Arthur Pendragon was the last king who was given mystery by the British Isles. Among the war-torn British princes, the humble king Vutikeng took advantage of the foreigners to unify Britain.

Fifteen years ago, King Arthur was defeated by King Humble, so he also had the idea of ​​placing hope in the next king. The mystery of Britannia was declining, and it was impossible to determine whether the next king would still be protected by Britain. Therefore, Arthur and the magician Merlin had a bold idea. The former king protected by Britain is only beyond the mortal, and the new king will be at an inhuman level from the beginning. They gave birth to a conception, the blood of the King of Britain, the blood of the incarnation of Britain-the red dragon, and the mother-to-fetus used to merge the two-the blood of the noble female. There is no romance, just like that, Al-Arthur King was born.

However, unlike Arthur, Artoria is a female and it is difficult to succeed as a king. And unlike previous estimates, Artoria's sister, Morgan, has completely inherited the mystery of the ancestor, and is a rare witch.

Ten years ago, Merlin made a prediction. "The successor of King Arthur has been selected. This character is the next king. The incarnation of the red dragon, the new king, will gather the knights of the round table, and the white dragon will retreat. The king is still alive, the proof will appear soon."

Since then, every British knight has been looking forward to the new king, and there is also the impetuousness of being the chosen new king. And the humble king is fiercely looking for a new king because of this prophecy.

When Altria was about 5 years old, she was led into the home of the old knight Sir Ektor. The son of Ektor, Kay, was also told by his father that "you have to teach your brother well as an elder brother", and he probably understood the relevant situation. Since then, Altria has lived a poor life in her adoptive father's house. As an apprentice knight, he was trained in swordsmanship and etiquette by Ektor, and at the same time participated in farming like her father and brother.

I spent most of the day receiving Wang’s education, and I also had to take care of horses to patrol the village in free time. Kay once asked Altria how long he could sleep, but the guy actually smiled and replied, "Don’t worry, brother. I’m. I took a good rest from early morning to before sunrise." It was less than 3 hours at all, and after Kay met Merlin, he also learned something that he didn’t want to know. The guy Altria was also dreamed of during sleep. The magician instilled the teachings of the king.

Ten years after the prophecy was issued, the day of selection finally arrived. That was the day when Altria was destined to pull up the sword of selection. During morning exercises, Aktor could not hide the reluctance of the corner of his eye, and Al Toria also pretended not to see. After giving Kay's set of knight gear to Altria, Akto told her that after handing the things to Kay, her homework for the day was over. When they came to the town, the townspeople were immersed in the atmosphere of the festival. Merlin had pierced the selected sword into the rock yesterday and announced that whoever can draw the sword is the new king of Britain.

Yesterday and today, countless knights failed before choosing the sword. After Kay took over the knight gear that Altria had brought, after a few words of routine, he stayed away from her and went to participate in the horse-riding battle that was destined to be meaningless. "Of course. Go back to Dad. If you are seen by others, you will be teased again. You also think about my hard work, who is always helping you out. Listen. This is the first and last chance. , You go home obediently."

In the distance is the atmosphere of the festival, the knights are fighting on horseback, and there is no one before the sword chosen.

"Really. It's just a fly in the ointment of a bad mouth... Thank you, Brother Kai."
"But, I'm sorry. I don't know what Aktor said, what an ideal king looks like." 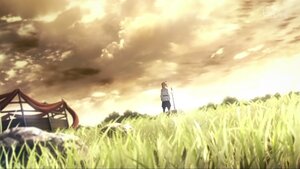 Artoria before pulling out Caliburn

The sword clasped his hands unexpectedly, something that had never been surging in his body was injected into the sword, his body became lighter, and he just had to pull it out in the next step.

"It’s better to think carefully before picking up that thing.
I won't hurt you, so don't do that.
Once you pick up that sword, you will no longer be a human until the end. Not only that. Once you pick it up, you will be hated by all human beings. :Welcome to the tragic death.”

The voice of the magician I had always seen in my dream sounded behind him.

" --No
Many people are smiling. I think it can’t be wrong. ”
...At that time, she was actually still scared.

The person who drew the sword from the rock—there is someone who is more suitable than himself to become the king of promise. If that person shouldn’t be able to build a more peaceful country, this kind of fear.

However, there is no such person. At least, it will not appear in another ten years. During that period, someone must assume this obligation.

Draw up the sword to be someone else.

Everything that I was afraid of so far is in the past.

This is the ritual to kill yourself.

If you have a human heart, you can't protect everyone with a king.

The so-called king is the existence that kills the most people in order to protect the people.

As a young girl, she thought about it every night, trembling until dawn. She was not scared for a day. But that will also end today.

No matter how many times she will be alienated, feared, or even betrayed, her heart will not change.

In order to live with people,

In order to leave a future for people.

That is the matter of being entrusted to the country. Show the proof of the king.

——It is also a matter of living in the responsibility of the king.

For her most important thing,

And choose to say goodbye to the most important thing she saw in her dream.

"Ah, you have chosen a difficult path.
But miracles come at a price.
King Arthur. You are going to exchange your most important things.”
The sword was pulled out as if it should have been, and the area was full of sunlight at this time.

She became something that was not human.

The king's gender was not important. No one would notice the strangeness of the king's appearance. As long as the king’s actions were indeed "the king’s actions", although no one notices that their king is a female, it is one of hers. Under the premise of a wise man, it seems trivial. This began the life of the legendary king. When she unsheathed the "selected golden sword" (Caliburn), she stopped aging and stayed as a 15-year-old forever.

In Fate/Grand Order, her name is spelled Altria.

The following is a folk dance saying:

Artoria Pendragon is the most widely accepted spelling in English Fate fandom. The US version of FGO adopted Altria Pendragon as the official spelling method, which caused dissatisfaction from some old players: Description at FGO Wikia. Artoria is the feminine writing of Arthur’s Latin form Artorius [1].