From Moegirlpedia
Jump to: navigation, search
“
To the Next Stage.
” 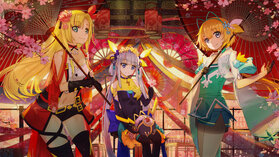 Project Ling (Project) is a virtual idol project under the banner of Seven Stone Animation.[1]

“
Let the singing go through dimensions!
”

The older sister in the group-Ling Yu.

The word "Yu" (雨) comes from the second solar term "rain water" (雨水) in the twenty-four solar terms. It is the time when everything is revived and the rains increase. The "Monthly Order Seventy-two Phrase Collection" has: "In the first month, there is water in the sky. Spring is the beginning of wood, but when the wood grows, water must be water. Therefore, the rain will follow after the beginning of spring. And east wind If it is thawed, it will disperse and become rain."

Taken from the second letter in the [[ancient rune alphabet.

It means "strength", which stands for struggle and enterprising.

When reversing, it means a missed opportunity.

"Shuang" (霜) is derived from the eighteenth solar term in the twenty-four solar terms: "frost drop" (霜降). It is the time when the seasons change from autumn to winter. The "Moon Order Seventy-two Hou Ji Jie" has "In the middle of September, the air is sore and condensed, and the dew is frosty".

The eighteenth letter in RUNE text.

When reversing, the meaning is disharmony,

The youngest in the group-Ling Qiu. ​​​

"Qiu" (秋) is derived from the sixteenth solar term "autumn equinox" (秋分) in the twenty-four solar terms. "Fen" (分) means the equinox of the day and night. Just like the vernal equinox, the sun shines directly on the earth's equator on this day, and day and night are equal. "Chunqiu Fanlu, Yin and Yang In and Out of the Upper and Lower Chapter" has: "Autumnal Equinox is half of Yin and Yang, so the day and night are average and the cold and heat are calm."

The sixteenth letter in the RUNE text.

Completeness (both opposites exist at the same time).

There is no reversal.[5]