From Moegirlpedia
Jump to: navigation, search
“
It is not the strongest of the species that survive, but the one most responsive to change.
”

Biology Girl（Japanese:; Latin:biologia） is the moe anthropomorphic character of the subject Biology. 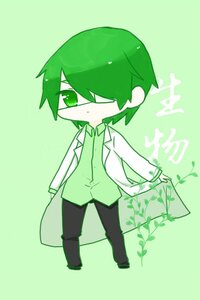 Biology is a large branch of natural science, which extensively studies all aspects of life, including the origin, evolution, distribution, structure, development, function, behavior, interaction with the environment, and even classification.

The huge modern biology, based on the discovery of cells, can be roughly divided into the overall biological research conducted based on early empiricism (such as Botany, Zoology, and Biotaxonomy), and the research based on the cell and even the molecular level after the discovery of cells (such as Microbiology, Cell Biology, Neuroscience, Molecular biology, and Structural biology).

Because of its practicality, biological research has been closely related to medicine, agriculture, hunting, gathering, and breeding since ancient times. After the cell was discovered, chemical methods were quickly introduced to study how the biological activities within the cell occurred. The current biology and chemistry have a very close connection (Sometimes it is called biochemistry).

Biology is one of the fastest growing subjects in the 21st century (A study conducted in 2012 found that, in only 45 years, half of the facts in biology will be overthrow by new researches, much faster than "stable" subjects such as physics). This means that you may not be able to recognize her appearance if you have seen her for a few years. However, despite the rapid development of biology research, the subject has been facing problems such as insufficient funding, the low recurrence rate of experimental results, and difficulty for biology students to find jobs.