Tsukishiro Alice (月城アリス) is a character of "Da Capo" produced by CIRCUS.

Tsukishiro was a cute little girl with Scandinavian bloodlines. Her father was pure Japanese and her mother was from northern Europe. Not good at communicating and expressing, she had few close friends. She had a doll which could ‘’speak ‘’ by methods like ventriloquism. She was also flexible and good at sports.

Tsukishiro was a girl who planted flowers behind the school stadium. The reason why she planted them was to make wishes when they bloomed. However, the flower she brought was lavender from northern Europe, which could no way blossom under the climate of Japan. Her lavenders was nearly totally destroyed after an storm. Only one of them was saved by Yoshino Sakura and came out finally.

Her father was the second eldest son of a famous family. Refusing to accept the determination of his family, her father travelled far away on his own to northern Europe and set up a circus. He got married with Tsukishiro’s mum and Tsukishiro was born.

When she was young, she travelled along with the circus, leaving herself little time to make friends. Concerned with her loneliness, her parents gave her a doll named ‘’Φ?λο?’’(Greek: friend) to please her. Actually Tsukishiro wanted a true friend. She cried to her parents for a friend, hoping that her parents would stop their career in circus. Unfortunately, her parents left her alone forever in an accident during a show. Tsukishiro blamed herself for leading all these disasters, and as a result, became more solitary.

Not controlled by gloves, her doll speaks ill. 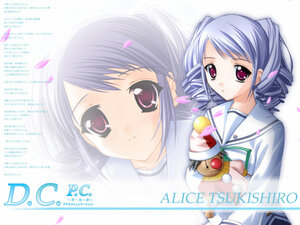 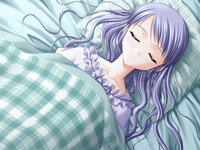 CG of Alice
▼ The text below needs help with translation!