Kuriyama Mirai is a character in the light novel Beyond the Boundary and its derived series. 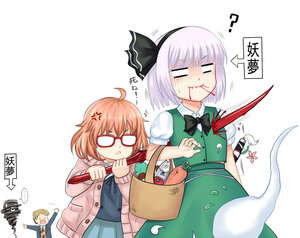 Her dream is to kill all Youmu. Wait, not that oneThe page "Konpaku Youmu" does not exist in English Moegirlpedia yet. You may want to refer to this page on Chinese Moegirlpedia: 魂魄妖梦. (zh:魂魄妖梦)!

Junior student at high school, Mirai is a Spirit World Warrior with the power of manipulating blood.

However, such power is regarded as abnormal in the Spirit World Warrior society. The cursed blood will encroach on everything it touches and is avoided by others.

She has once been unable to kill Youmu because she killed her friend who was controlled by a Youmon to protect herself, thus she lost her income and lead a poor life.

Due to her special power, she often loses too much blood and needs to eat a lot to make up for her lost blood, thus causing more poverty.

Apart from that, she also likes gardening and was said to have devoted tens of thousands of yen to a single pot. As a result, she is even unable to pay for house rents and food, and cannot even afford a square meal.

Her main source of income now is hunting Youmu and working part-time as a model, her photos are mostly purchased by someone called A.K.

Her catchphrase is "This is uncomfortable" (です)

When telling a lie, she would rub her glasses and glance sideways while trying to explain in stutters.

She stopped Akihito as a Youmu with her own blood in episode 4. And displayed her bad singing ability in episode 6. Despite her practice to perform well and catch the fruit-shaped Youmu, they still did not succeed in killing it. We are all acting to attract it, so who should kill it?

Episode 10 informed that she came to the city ten months before the beginning and began her failed attempts to stab Akihito.

She disappeared in episode 12 within 'Kyokai no Kanata' (lit, the other side of the boundary). But she encountered Akihito again on the balcony, the same place where they first met.

A year after the ending of the TV series, Mirai met Akihito again, however, her memories are lost.

She joined the Literature Club under the invitation of Mitsuki and became the vice president.

She told Akihito that she is already aware of her ability and asked Akihito to tell her more, but was again attacked by the man in black, who turned out to be Izumi.

Mirai was making instant noodles while crying in her room when Akihito came to talk. She asked Akihito to wait outside, but then Mirai received a call from Akihito and finally realized that the 'Akihito' outside was fake.

She was attacked by some mysterious black liquid controlled by the fake Akihito. Her hair also turned black.

She fought with Akihito all the way into the sewage pipes and was awakened by her own ring.

When she was a little girl, her mother told her the fate that her family bore. She also witnessed in great despair her mother being killed by angry people.

She met Akihito in her dreams on a beach and fell into the sea after sobbing. However, she was rescued by Akihito.

The following story indicates that Mirai's mother and Akihito's mother have some kind of relationship.

She with Akihito returned to the original world after making a vow together.