From Moegirlpedia
Jump to: navigation, search
“
”
— Last Order, to Accelerator

Last Order is a character from the light novel A Certain Magical Index and the manga A Certain Scientific Accelerator.

Last Order, #20001, is a clone of Mikoto Misaka who was created with the same DNA as the Misaka Sisters in the "Level 6 Shift Project". In the plot, she is an individual who is different from the others in terms of age and biological ability, and she is the manager of the Misaka Network who uses different control and orders from her "Sisters". After being rescued by Accelerator, she tagged along with him.

Last Order's personality profile shows that when she escapes, she subconsciously avoids the person while dressed as a researcher in a white lab coat, and in a school city where there is surveillance everywhere, she has the survival instinct to completely avoid being tracked. She is also a copy of Misaka, and her ability is "Radio Noise". (However, it is mentioned in the thirteenth chapter of the novel to be identified as Level 3.) Unlike her sisters, she is very expressive and has a set personality. She often ends her sentences with "...says Misaka, as Misaka xxx" (って、御坂は御坂ｘｘｘみたり). In her first appearance, she was wrapped only in a dirty blue towel, but currently, she wears a blue dress with white dots along with a lab coat.

She was not supposed to leave the incubator because his body had not yet been adjusted, but he escaped from the incubator "out of instinct" in order to prevent Yoshio Amani from writing the characteristics of the virus, and she was wandering around Academy City for a week when she met Accelerator. The virus was implanted before escaping, and once the virus is activated, the "last order" is issued through the Misaka Network, ordering the "sisters" around the world to attack humans indiscriminately and then "control their hearts to stop beating", which was finally stopped by Accelerator. However, Accelerator was also hit in the brain by a bullet and therefore lost his processing abilities, but Heaven Canceller was able to access the Misaka Network for him and restore 48% of his ability. 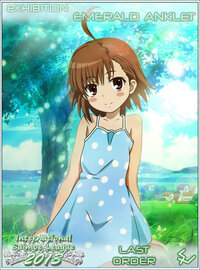