Jotaika (Japanese: 女体化, じょたいか) refers to an artistic creation technique that gives women the appearance, character, and costume of anything. The jotaika we are talking about now generally refers to the jotaika carried out by the moefication technique, also known as nianghua. Moefication emerged with the development of modern ACGN subculture and Moe culture.

Jotaika and gijinka are two related but distinct concepts.

The two belong to the cross relationship. In addition to the large overlap in their respective ranges, there are also parts that do not belong to each other.

Jotaika is to assign non-female things and characters as female images, and its scope includes the anthropomorphization of women in personification and the conversion of original male characters into female characters.

Nianghua and genderbending have certain similarities, but there are essential differences.

Nianghua is a process of artistic creation, a process of giving non-female things and characters as female images.

After Nianghua is another character, it is to create a new character.

Sexual conversion is a physical feature (overhead), or the process of achieving this physiological change. Before and after the sexual transition, although the gender has changed, it is still the 'same character' instead of a new one.

The following example can illustrate the difference between the two (among them, sex conversion, just talking about male to female):

An existing male character, such as Kyon ("The Melancholy of Haruhi Suzumiya"), is endowed with female characteristics through artistic creation, and another character "虚子" is born.

This process belongs to "jotaika". Kyon and Kyonko are two characters'. 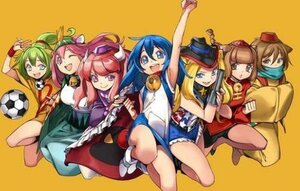 The Doraemons as cute girls