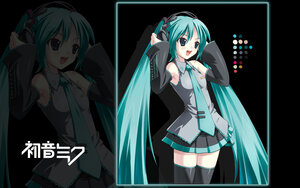 A singer is a person who uses their voice to perform. It is also a moe attribute in the ACGN (anime, comic, game and novel) subculture. Female singers are sometimes called 歌姫, or Utahime in Japanese.

"Singer" refers to an individual who uses their voice to sing, vocalize or harmonize.

Singers are appreciated by people for their excellent performance in terms of their own image, singing, and performance. Because of their fame, there have been many professional singers in the world since ancient times.

Singing usually requires music or band accompaniment. Sometimes the singer is a member of the band, acting as the lead singer (VO./vocalist).

In some sci-fi works related to superpowers, those with sonic manipulation, or magical music abilities also have the attributes of singers, creating various special effects through the voice of singing.

Since songs are a kind of popular culture most of the time, the roles of singers usually also have idol attributes.

In recent years, voice synthesis technology has gradually developed, the use of software can synthesize human singing voices. Therefore, the term "virtual singer" was born, which is intended to provide singing voices like singers in the traditional sense. However, they have no personality, and it seems right to say that they are nothing but a singing machine without emotions.

But there are also other virtual singers that aren't necessarily software. These can be either an avatar of a real person (who uses it to protect their identity) or they may have a personality of their own. These are sometimes called "virtual idols".

Some of the most popular include Soraru, Mafumafu, and Kano.

Notable characters who are singers