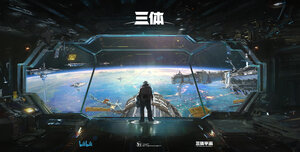 By Li Miao, a Chinese physicist and science writer, with a recommended preface by Liu Cixin, "A Science More Magical than Science Fiction" has won many awards, including the World Chinese Science Popularization Gold Award.
A popular science work that analyzes the physics related to the science fiction content in The Three-Body Problem with a truly scientific perspective, which has been recognized and praised by Liu Cixin himself.
The book exhaustively introduces the possibilities of realization of Sophon, Waterdrop, dual vector foil, gravitational-wave system, curvature navigation, dimensional change, mental steel, dark forest, etc. with the relevant science fiction content of the frontier of modern physics.

This is a work of homoerotic fiction created by netizen Bao Shu for the The Three-Body Problem series.
It was originally published on newsmth.net and Baidu Tieba, and was widely praised (but later some people thought its plot was cliche, a wretched sequel to fine work). And then it was published by Yao Haijun, the deputy editor-in-chief of Science Fiction World.
The work filled a gap in the plot, and this gap was intended to be a parallel novel, so it was hard to hold back The Three-Body Problem 4. True-fans hound officials to death

This is a game based on the original book The Three-Body Problem. In this game, the individual plots are made into small modules, independent of each other but connected.

Note: This game is not for profit, a tribute to the original author Mr. Liu Cixin

The Facebook company has developed a Go program based on deep learning techniques of convolutional neural networks and Monte Carlo tree search technology, naming it Darkforest. Tian Yundong, a researcher at Facebook's Artificial Intelligence Institute, who is in charge of the project, claims, "I named my program 'Dark Forest' because I'm a fan of The Three-Body Problem. "