Dunk for Victories, is the thirty-forth season of the Pleasant Goat and Big Big Wolf series. Also, it is the first season of Yundong Yingxiong Zhuan.

ɅBA was about to start, all ethnic groups were ready to go, and the Goat Village Basketball Team was born in mockery. Weslie firmly believes that human effort is the decisive factor, leading the team to challenge strong opponents again and again. On the other side, Wolffy played for the Wolves Team and made an appointment with the goats to enter the final. Although the process was tortuous and arduous, they have always moved firmly on the path of chasing basketball dreams. 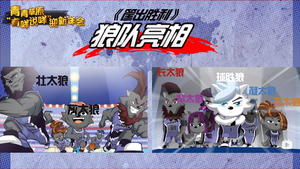 Introduction to members of Wolves Team in CPE's live