This is a Japanese name. The family name is Fuji.

Fuji Aoi is a Japanese Virtual YouTuber and singer.

Fuji Aoi started her activities on December 8, 2017. Her original goal was to spread the best of Japanese culture to the world.

She as a 17-year-old female high school student, her hair is styled in a high ponytail and has bangs, and she often wears a blue headband. Her personal promotion slogan is "The support leader in your heart (キミのの, kimi no kokoro no ōendan-zan), calling her fans "Aoi Opera Troupe" (, Aoi kagekidan).

The content of her videos are mainly narratives, live games, and song covers. she often laughs while streaming, which has become a feature of her.

Her "Unbelievable World Hunter" series is the longest series in Aoi's channel. In each episode, Aoi would travel around the world to introduce famous local attractions.

The "tasting series" also has several episodes (cola, green tea, ramen, etc.) If she got a food or beverage wrong, she had to play a horror game as a punishment.

A livestream revealed that she practiced her singing by herself and had not been trained by any professional organization.

Her famous works are the covers of Sparkle, Nandemonaiya and "Zenzenzense", songs from the movie Your Name. 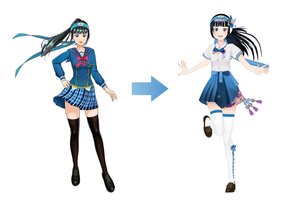 Fuji Aoi after her upgrade

In her early days, Aoi's crude 3D model scared many viewers away. So, on January 24, 2018, Aoi's staff announced the crowdfunding plan "I want to be cute! 'Making Virtual YouTuber Fuji Aoi Cute' Project" (かわいくなりたい！バーチャルYouTuber『富士葵』をかわいくするプロジェクト) on the crowdfunding platform Makuake. The initial goal was to raise 10 million yen (¥10,000,000) in funds for equipment upgrade and optimization for Aoi's model. On February 4, 2018, 11 days after the project started, the goal was reached, and the operation team announced a higher level of goals.

On April 3, 2018, in a PANORA interview, her new model was officially revealed.