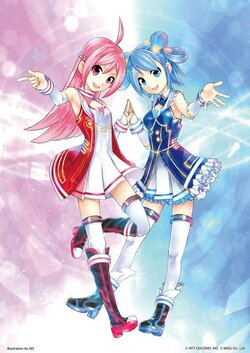 The first two seasons of the project were "live animation", with two live broadcasts (essentially a form of raw broadcast) in Chinese and Japanese using the same set of scripts for each episode, but in the third season it was transformed into a VTuber project with four members called Tacitly.

The first and second seasons are positioned as "Bridge between China and Japan", bringing together the expectations of Chinese and Japanese netizens for the future and "connecting the future" together.

In December of 2016, the Japanese company NTT Docomo and China Mobile's Migu Animation announced they would join forces to develop a "virtual idol project."[1] The project was launched in the summer of 2017.

Kilin
Xi
Her name comes from the "Xi" (犀) in the Chinese idiom "心有灵犀一点通" (xin you ling xi yi dian tong), meaning "the hearts of loved ones are closely linked".

The members of Tacitly