M1911 is a character from the Tactical SRPG ES game Girls' Frontline developed by MicaTeam and piblished by Digital Sky and its derivatives.

M1911 was invented by American weapon designer John Browning and was taken into production by Colt during 1911. It was carried along with the America army during WW1, WW2, Vietnam War, Korean War and the Bosnian War.

The reason it was born because during 1899-1902, during the Armed conflict between America units and Moro guerrillas, the America soldiers noticed that the using the then-standard Colt M1892 revolver, .38 (9mm) Long Colt, found it to be unsuitable particularly in terms of stopping power, and the reload speed is too slow for close quarters combat. So, they decided to bid .45 Colt caliber or semi-auto pistol as thier new standard equipment. During the bidding, M1911 had experienced 6000 shots, anti corrosive, anti dirt and many other brutal test. Following its success in trials, the Colt pistol was formally adopted by the Army on March 29, 1911 as a standard equipment and started it's 74 years journey with the army.

After the World War 1, the Amry requested several minor changes based on M1911 combat performance : 1. A wider front sight, creating a "Patridge-type" sight, allowing the user to aim quickly even in low lights. 2. A shorter trigger, making people with smaller hands to reach the trigger easier. 3. Simplified grip checkering, making users with smaller hands or gloves to trigger more easily. 4. Cutouts in the frame behind the trigger, increases the feel while firing the gun. 5. An arched mainspring housing, increases the texture of the housing. 6. A longer grip safety spur, to prevent hammer bite. 7. Shortened hammer spur, making it easier to operate.

All of the changes are done and tested in Springfield Armory. The upgraded M1911 was put into production in 1926 and was named as "AUTOMATIC PISTOL, CALIBER .45, MODEL OF 1911A1".

U.S. Marine Corps First Division John Basilone and two other Marines used M1911A1 and two M1917 machine guns to hold off a charge by hundreds of Japanese soldiers. On the other hand, the U.S army uses M1911A1 causing a stop on Japanese army advantage between close quarters knife combat.

U.S. pilot Owen J. Baggett uses his M1911A1 to take down a Japan fighter, causing it to crash.

During the time when the people knowledge isn't that good, so some rich people or warlord given a nickname to M1911 based on how it looks like.

Although nowadays U.S armies are more equiped with M9 pistol, but being a classic .45ACP launcher, and furthermore, .45acp is born to be used with silencers due to the effectiveness. Most people have a unspeakable feeling agaisnt .45ACP Even the Japanese had ate it before and they said it taste great !, partical police or special forces are still equiped with M1911 series handgun, and the world's largest M1911 production company (Jinbo Company) also produce a specific version for Naval Task Force (M45A1). Due to the fame of it, causing many other countries to counterfeit for example lolicon millitary company Norinco, one America journalist made a comparisons between the original and the counterfeit, and Colt original M1911 is on number 6 whereas Norinco is on the first..

Unlike any other weapon with more than a hundred years in service, M1911 is still in service within the American military Lets ignore M2HB…… due to its classic design, leaving a deep impression in many American minds. Numerous American companies and workshops are still selling modification accessories for the M1911, having superior capabilities of modification, it is often a must for firearm collectors. During the 90s, the Beretta M9 had been issued in large numbers to the U.S army but most Spec Ops still preferred using the M1911A1 and its derivatives, because they considered that one shot-one kill is more viable than three shots-one kill. US Special Operations Command had been demanding improved .45-caliber pistols based on the M1911A1, but recently shifted its focus to high-velocity, small-caliber rounds such as the 9mm Luger or the 5.7mm FN for their improved stability and higher magazine capacity due to their small size, and also because of that the low-penetration, high-stopping power .45 ACP cannot effectively counter enemies in grade II or III vests. Despite this, the M45A1 used by marines never had a replacement. 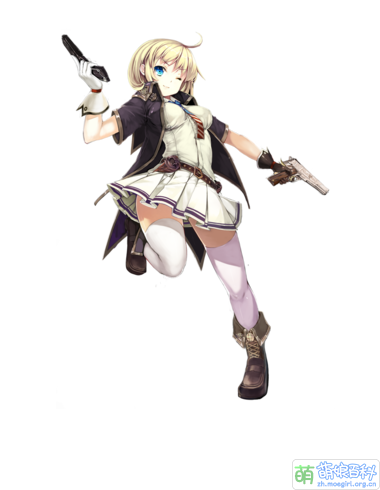 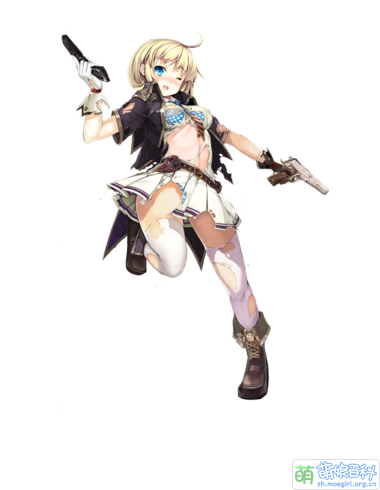 M1911 is the first gun for every players, but other then that, due to the high drop rate and not so effective buffs, she was used as food for other T-dolls At least her fame is also special.

Showed in the second map (night battle) as commander.

Most of the time she was being compared with M9Fighting over Commander's :) as competitor，causing confusion and sadness.

Many Devil May Cry fans will notice that M1911 is holding one black and one white version which is quite similar to the main character's weapon. Not

only that, Ebony & Ivory is the modified version of the original M1911. People who have sharp eyes will notie that the white gun have a golden line

which isn't the same as Ivory. Further more, unlike Ebony & Ivory, both of the guns doesn't have the grooves on the gun barrel. Which make it seems

like the combination of (Ebony & Ivory) + (Light & Dark). And on the handle, there isnt the paint job which is done on the Ebony & Ivory, making the

feel that it was confiscated. One little point is that Dante holds the Ebony on his left while Ivory on his right but appearently, M1911 hold it in a diffrent way.She finally get it right after the upgrade

In the anime, Kinji Tōyama also uses two Silver M1911(maybe is M1911A1 ?), which has custom paint of 神崎香苗 side profile on the handle.