PPK is a character from the Tactical SRPG ES game Girls' Frontline and its derivatives, developed by MicaTeam and published by DigitalSky.

PPK is a pistol developed by Walther in 1931, with PPK meaning , though a now-accepted but incorrect interpretation of "K" as also exist. It is widely used by the Gestapo after the Nazi party took power. The PPK has its return spring mounted on the barrel itself, as found on Browning pistols and possesses a double-action trigger assembly, loaded chamber indicator, and a number of safety measures such as manual safety, firing pin safety, bolt safety and impact safety. It also utilizes the reliable exposed hammer design and longitudinally-pressed magazine release found on mid-to-large-frame pistols. Though lacking penetration, the 9mm cartridge used by the PPK has decent stopping power, making it suitable for personal defense uses, therefore hooking the attention of some countries to this compact but decently-powered pistol.

It is also seen in popular culture, the most famous case being serving as the gun of the fictional agent James Bond.

The magazine catch is located to the left of the grip, behind the trigger.

A lightweight variant of the PPK developed by Walther in the 1950s.

Sales started in 1972, with an all-steel structure and fires 9x18mm rounds. The Bundespolizei used approximately 2000 pistols of this model. Manufacturing ceased in 1979.

A hybrid model built from PP's slide frame and the slide from the PPK. Designed specifically to increase its dimensions to bypass the Gun Control Act of 1968 by the US. Meant for the American market only.

Similar to the PPK/S, albeit at a lower cost. 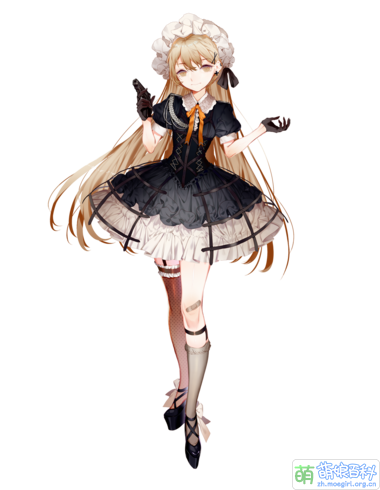 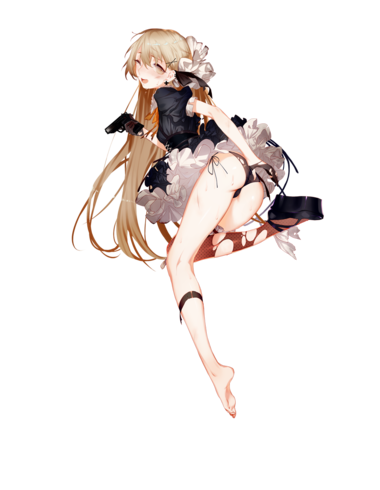 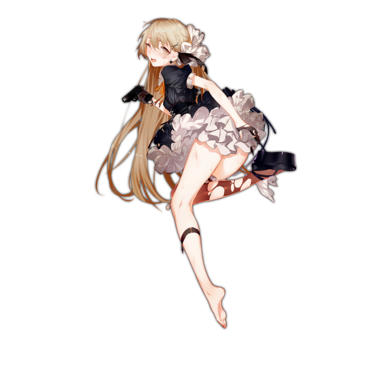 PPK has a decent drop rate in-game, with a handful at almost every level. Her large-area T-shaped effect blocks are useful when there are few high-rarity T-dolls at disposal in the early phases of development. Since she comes from a hall of fame, and is highly sadistic. Though elegant and tempting from her look, and with a constant smile, she finds it fun tricking others.

The illustrator utilizes a high amount of black leather elements for her outfit. The distinctive corset and the fishnet stocking also transfer the "you know" message. Black gloves, half-raised arms and her emotions also help emphasize her personalities. While her posture and facial expressions after she gets damaged are full of temptations. Recommend using with voicelines.

It's hard to imagine the PPK gets merely 2 stars for her skills and her own stats. Even without the assistance of equipment, her raw dodge rating is capable of reaching 100, an extreme for virtually every T-doll. The position of her effect blocks further support that she is capable of handling front-line combat. She turns less suitable for RF echelons after the major skill revamp, but still excels in AR echelons or pure-fleet HG echelons. Provided that you have 5-star fully-strengthened perfect-calibration sights for your RF T-dolls, otherwise the PPK can still get happy in your RF echelons. [1]