M99‎ is a character from the Tactical SLG game Girls' Frontline developed by MicaTeam and published by Sunborn Games and its derivatives. She joined the struggle on October 1, 2016.

The weapon is a newly-designated anti-materiel rifle for export to the international market. Externally, it resembles the British Accuracy International AS50, and both use a gas system to cycle the bolt, with the barrel protected by a heat shield, to prevent the heat from interfering with aiming. However, upon closer examination, the M99 differs from the AS50 both visually and structurally. The M99 uses a rotary-bolt similar to the M16, different from the AS50.

The receiver of the M99 appears to be thicker than that of the AS50, but the gas tube is extended rearwards to protect the bolt from the residual fouling, and the bolt carrier is fitted with an extra part to the top that shrouds the end of the gas tube to cover it throughout the cycle, which is the reason why the receiver has a raised rear section. Also due to how the receiver is cold-forged from a single aluminium-alloy block, the weapon's overall size is larger. However, despite the larger profile, the M99 is 2 kg lighter than the AS50. 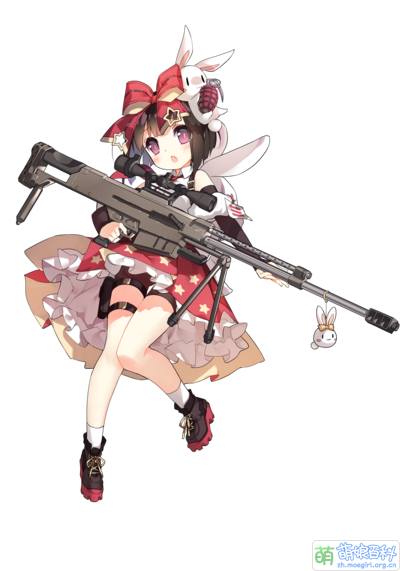 Adept in studying, a model student who's serious and obeident. Very competent yet fresh to the world, a bit stubborn, which coupled with her extreme emphasis on her own image, often creates embarrassing scenarios. (擅长学习、认真听话的模范生，十分有上进心，但是涉世又浅，脑筋比较死，加上极度重视本体形象，常常闹出各种哭笑不得的状况。)

The inspiration for M99 is mentioned in the official art collection, as shown below:

Your game [Girls' Fronline] has too many [characters with] breasts, for world peace I have to increase the numbers of [characters with] flat chests, so M99 was turned into a loli. The dress is stars on red since [she] is a Chinese gun, with the Daduizhang badge. Finished and found it's quite rabbit-ish, so [I] added a bunch of rabbit doll-bots. (你游巨乳太多了，为了世界和平我一定要增加贫乳的数量，所以M99就变成幼女了。因为是国产枪所以裙子是红色底色配星星，还有大队长肩章，画完发现好像蛮兔子啊，所以加了一堆兔子布偶机器人。)

M99 appears to be tripped by her own weapon as she wins a battle.

According to descriptions of the midnight chapter of Episode 5, the reason why M99 was chosen as a makeshift squad leader is because she is cute, and the squad itself in the story appears to be dynamically formed, with the possibility of being reformed if the situation requires. M99 also mentioned having not comminucated with and mutually take advices with Type 95 and Type 64 for some time.

However, judging from how squads are formed with dolls of different "nationalities", it may be possible that members of this specific squad would be re-arranged according to their different preferences towards food.

Unexpectedly, M99's stats appear to be one of the worst-nerfed among high-damage RF dolls.

As a semi-automatic anti-materiel sniper rifle, M99's Rate of Fire remain at a slow 32 (~1.56 sec/shot), which, though high in her class, the actual rate of fire of an M99 in reality is roughly on par with that of a bolt-action PzB 39.

Despite so, the M99 still proves to be a formidable doll once properly leveled and powered-up.