MAC-10 is a character from the SLG game Girls' Frontline developed by MicaTeam and published by Sunborn Games and its derivatives.

The MAC-10 (officially the Military Armament Corporation Model 10) is an open-bolt, blowback-operated light submachine gun (or machine pistol) developed by Gordon B. Ingram in 1964 for spec ops units.

The MAC-10 is almost entirely made from stamped sheet steel, with the notable exception of the bolt, which is precision-forged. The cocking handle protrudes from the top of the receiver, which locks the bolt if turned 90 degrees, preventing the weapon from misfiring should the system fall to the ground or fire prematurely due to its open-bolt nature. The weapon rarely malfunctions because of its simple yet sturdy design. The MAC-10 uses a rectangular receiver, an L-shaped telescoping bolt which covers part of the barrel inside the bolt, and a magazine housed inside the pistol grip to reduce length and shift the center-of-gravity, all of which contributed to the weapon's compactness and concealability. A knob-type selector is positioned on the left of the receiver which sets the weapon to safe, semi- or full-auto mode.

The MAC-10 possesses a high rate of fire due to its open-bolt design and the light weight of the bolt itself. However, the weapon is prone to malfunctions such as misfeeds due to its short recoil length, small receiver and high rate-of fire.

The barrel is threaded to accept its exclusive silencer, which reduces the sound of discharge without lowering the muzzle velocity of the rounds, in addition to shifting the center-of-gravity to assist balancing. To reduce design costs, the .45-caliber MAC-10's use the same magazine as that of the M3 Grease Gun.

The MAC-10 can also be fitted with a small telescopic stock to mitigate the recoil. However, it was deemed an ideal close-quarters weapon when it was first introduced. There are also rumors that the MAC-10 would be the ideal weapon for gangs and terrorists due to its high concealability and its superior firepower in cramped indoor spaces. However, the weapon's poor accuracy makes it "fit only for combat in a phone booth", per David Steele, weapons researcher of International Association of Police Chiefs. 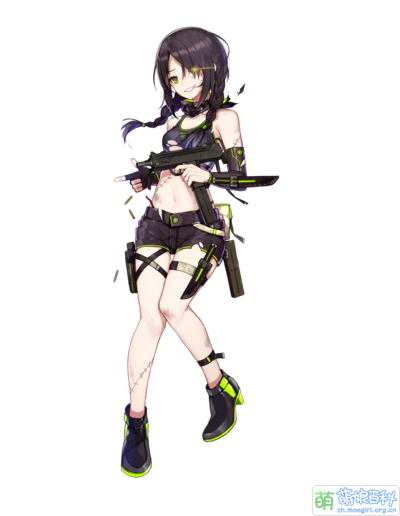 Despite so, one of her quotes reminding the commander of an ant narrowly escaping death may hint at a potentially kinder side of her personality.

With incisive research the player community had put together various parts of different dolls, which eventually revealed the true identity of the "mysterious doll" as an amalgation of Ingram, Bren, FAL in her old design, Type 92, WA2000 and SAA from top to bottom.