Gr MP5 is a character from the SLG game Girls' Frontline developed by MicaTeam and published by Sunborn games as well as its derivatives. She is based on the Heckler & Koch MP5.

The Heckler & Koch MP5 submachine gun is a submachine gun developed by the German firm Heckler & Koch, being one of H&K's most famous and most-produced weapons. It is well-known throughout the globe as it is being fielded by the military, the police and security forces of various nations.

The MP5 originated from Project 64, H&K's project on miniaturizing the HK G3 into a submachine gun in 1964.

As NATO and Warsaw Pact began their standoff phase during the Cold War in the 1950s, West Germany drafted a new armaments plan in 1954 and conducted trials on standard-issue submachine guns (which are different from rifles) to boost the development of its own submachine gun. Various weapon-designing companies attended the trials with the participation of some foreign weapons.

To attend this test, designers of H&K, Tilo Möller, Manfred Guhring, Georg Seidl and Helmut Baureuter began design works on Project 64, which would become a submachine gun as a minituarized G3. They named it the MP·HK54, which fires 9x19mm pistol cartridges, with a cone-shaped front sight similar to early CETME rifles, while the rear sights were similar to later models of the CETME rifle.

THe HK54 was shelved as H&K was preoccupied with the production of its G3 rifles, with only a few prototypes by 1964. The HK54 was only unveiled in 1965, with H&K providing samples to the German military, border guards and police units for trials. The 5 in the designation refers to a 5th Generation SMG while the 4 denotes a chambering of 9x19mm cartridges.

The MP·HK54 was designated as the MP5 (Machinenpistole 5 or "Machine Pistol 5) by Autumn, 1966 by the border guards of West Germany. This designation then continued to be carried over up to this date. The Swiss police adopted the MP5 in the same year, becoming the first country outside of Germany to adopt this weapon.

The sights on the MP5 was revised by H&K after trials, the rear sight changed to a rotating drum calibrated at 25-100 meters, the exposed front sight hooded, and the finned barrel smoothened. The weapon was also modified to accept muzzle attachments such as flash hiders or silencers. This modified model became the MP5A1.

The MP5 had excellent performance, especially when it comes to accuracy, thanks to its semi-free bolt and roller-delayed blowback. The two-part bolt consists of a bolt head with rollers and a bolt carrier. The heavier bolt carrier lies up against the bolt head when the weapon is ready to fire and inclined planes on the front locking piece lie between the rollers and force them out into recesses in the barrel extension. When fired, expanding propellant gases produced from the burning powder in the cartridge exert rearward pressure on the bolt head transferred through the base of the cartridge case as it is propelled out of the chamber. A portion of this force is transmitted through the rollers projecting from the bolt head, which are cammed inward against the inclined flanks of the locking recesses in the barrel extension and to the angled shoulders of the locking piece. The selected angles of the recesses and the incline on the locking piece produce a velocity ratio of about 4:1 between the bolt carrier and the bolt head. This results in a calculated delay, allowing the projectile to exit the barrel and gas pressure to drop to a safe level before the case is extracted from the chamber. Due to how the bolt of the MP5 works, the bolt needs to return in place at a high speed, otherwise it may not lock in place. Therefore, the standard procedure of reloading an MP5 involves pulling the charging handle back to the rear (and locking it) before loading in a new magazine, followed by smacking the charging handle to return the bolt via the force of the recoil spring, a prominent feature of the MP5 commonly seen in documentaries or film works.

There is also a cavity in the bolt carrier of the MP5 housing 38.6 grams of loose tungsten granules as an anti-bounce device, as the MP5's bolt is too light and fires from a closed bolt, preventing the bolt from bouncing back as it impacts the barrel extension, causing an incomplete lock, breaking the automation.

The MP5 is widely fielded by military, police and security units of multiple countries due to its design and high-reliability, while H&K continued to improve and develop variants, totalling to over 120 variants. 10mm Auto and .40 S&W-chambering variants designed for specific users were also introduced near the end of 1990. The MP5 dominated the submachine gun market from the 1970s to the year 2000

The MP5 now is produced, either under license or replicated without license and used in various nations such as Turkey, Greece, Pakistan, Myanmar as well as Iran. Replications were also renamed (without changes made to the weapon itself), such as the Chinese NR-08 or CS/LS3 as well as the SWA5 of the US. However, most replications of and license-built MP5s are early A2 and A3 models without the 3-round burst system and the fine quality of the original firearm, causing differences in internal design and poor reliability. 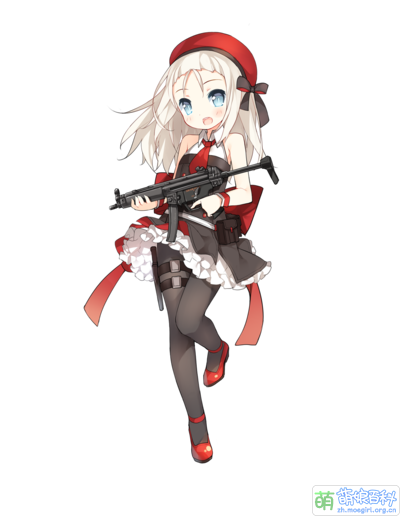 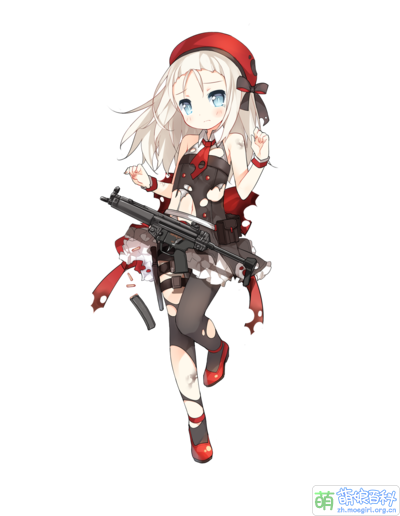 Gentle and friendly, cautious with things, good-tempered, prone to embarrassment to friends. Worries a lot about her build, but, unexceptedly, likes cool stuff. (温和友善，做事谨慎，脾气很好，对朋友容易拖鞋，很在意自己的个头，不过，意外得喜欢酷的东西。)

Gr MP5 possesses a calm but weak personality, cautious but without a bit of fear in operation. Though capable of firing stable and reliable shots, she is unsatisfied with her tiny build and strength, and prefers the cold black as her color.

Her introduction quote mentions her shorter physical profile, and she drinks milk every day as mentioned in her adjutant quotes, despite the weapon itself is one of the larger members of the MP5 family.

However, despite the smaller size, Skorpion and Micro Uzi appears to be even taller than Gr MP5, putting speculation that the shorter profile rooted in the personal preference of her illustrator.

This caused Gr MP5 to usually occupy a substantial amount of space in the player's armory, becoming the fastest SMG to reach x5 dummy link and commonly the most-retired doll, fating her with almost immediate retirement if her commander happens to be short on cores.

The GSG UX Exoskeleton introduced with the midnight chapter of Episode 4 exclusive to Gr MP5 helps alleviate her somewhat low evasion of only 68, stemming the tide of Gr MP5 "falling immediately" in battle. However, the inherent 90% accuracy debuff of all midnight chapters and the increased difficulty, plus it being positioned in chapter 4 (which sets the Strength at 11000-16000 Night Battle) deters many (especially newer commanders) from trying to roll the chances. 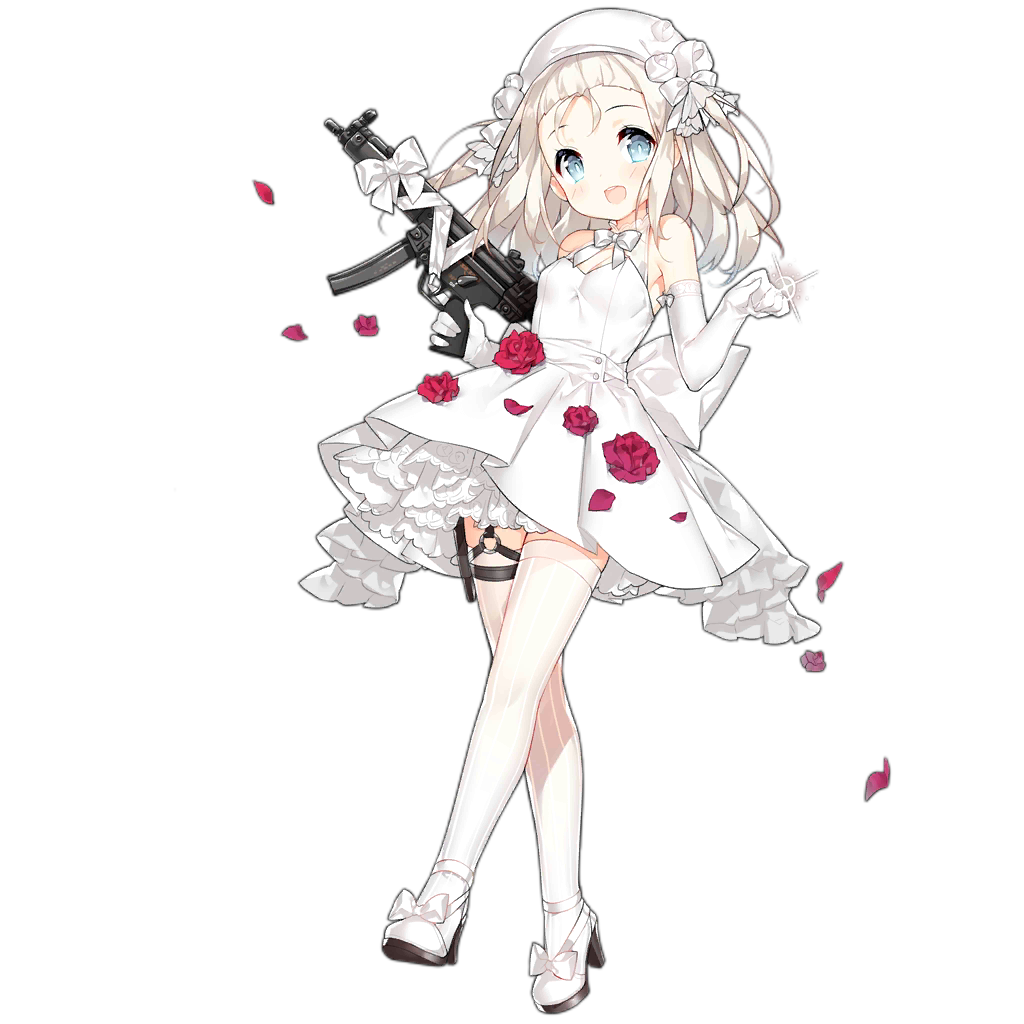