AUG is a character from the Tactical SRPG ES game Girls' Frontline developed by MicaTeam and published by Digital sky and its derivatives. She joined the struggle on May 20, 2018

The Steyr AUG (AUG for Armee Universal Gewehr in German or "Army Universal Rifle") is a gas-operated, magazine-fed, selective-fire bullpup assault rifle developed in the 1960s to replace the StG 58 (FN FAL) the fielded by the Austrian military. The military demands an accuracy no worse than the Belgian FN FAL, a weight no more than the American M16, a length less than or equal to that of contemporary SMGs, and a reliability no less than the Soviet AK-47 and the AKM when used in adverse conditions. Three variants (rifle, carbine and LMG) were planned, with an SMG variant added to the family later.

Work on the new weapon was spearheaded by the subsidiary of Steyr-Daimler-Puch, Steyr-Mannlicher GmbH, AT, main designers of whom are Horst Wesp (designer of the Glock series of Pistols), Karl Wagner and Karl MÖser, while Colonel Walter Stoll supervised the entire process. The AUG uses a bolt group resembling that of the AR-10/15, but with a locking mechanism to improve reliability.

The Austrian Military compared the AUG with the FN FAL, the FN CAL, the Czech Vz. 58 and the M16A1. The AUG performed well, and was excellent in terms of reliability, target acquisition and muzzle rise. This new rifle passed technical and field trials before being adopted into service in 1977 by the Austrian Army, naming it the StG 77 ("Assault Rifle 77"). Serial production began 1978.

From then the AUG became a famed name, adopted by various militaries aside from Austria's own.

At the same time the AUG is also purchased by numerous security and law enforcement agencies worldwide, including the US Coast Guard. Few bullpup rifles get to be fielded by law enforcement agencies or spec ops units, but AUG makes an exception. It can be said that the AUG is the most commercially successful bullpup assault rifle up to date. Starting from 1997, Steyr-Mannlicher began manufacturing a new variant with Picatinny rails, the AUG A2. The Austrian military currently fields the StG77 A2, aka the AUG A3, while the weapon depicted in the illustration appears to be an AUG A1. 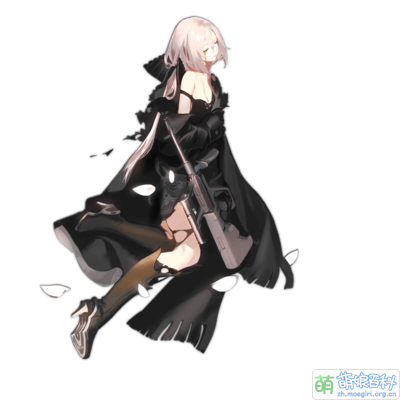 As a T-doll, though she's capable of sensing the emotion of sadness, she does not possess the function to drop tears.

The scent of her flower replaces the dull smoke on the battlefield, giving her adversaries the most beautiful burial. She cannot express the grief in funerals, but makes death more seductive.

She feels safe the most when walking in the rain, and that's also when her smile can be most easily seen.

-From the Official Description