'NTW-20 is a character from the Tactical SRPG ES game Girls' Frontline developed by MicaTeam and published by Digital Sky and its derivatives. She joined the struggle during the Closed Alpha phase.

The NTW-20 is a large-caliber anti-material sniper rifle developed by Denel of South Africa in the 1990s.

It is designed to become a multi-purpose sniper rifle capable of striking a variety of targets, with the ability to fire special ammunition. Like weapons of the same kind, the NTW family of sniper rifles can also be used in counter-sniper and explosives disposal roles.

The reason for South Africa to develop the NTW-20 may have ties to the weapons imporation ban caused by Apartheid. South Africa had to seek out other options due to the unavailability of heavy anti-armor weapons. Development of the NTW-20 was announced in 1993 and officially commenced in 1995, first under Aerotek, and then the design was purchased by Denel, and is now materialized by Pretoria Metal Processing, part of Denel. The chief designer of the weapon is Tony Neophytou, a specialist in designing helicopter turrets and recoil buffers, who also participated in the development of the Neostead combat shotgun. Using ready-made parts from the Vector GA1 autocannon, the first working prototype is completed in only four months. 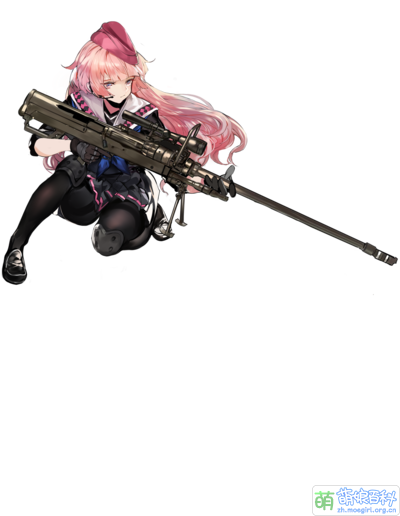 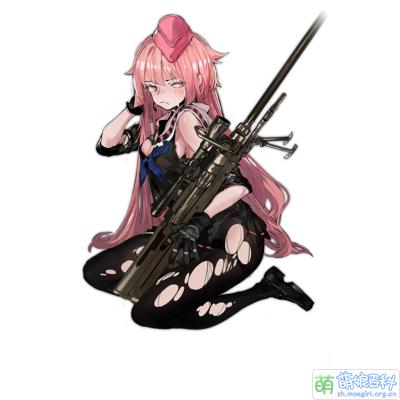 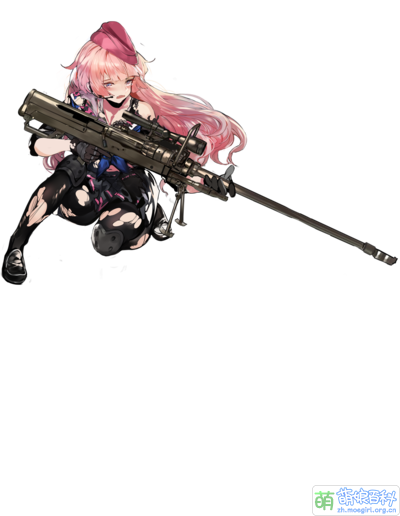 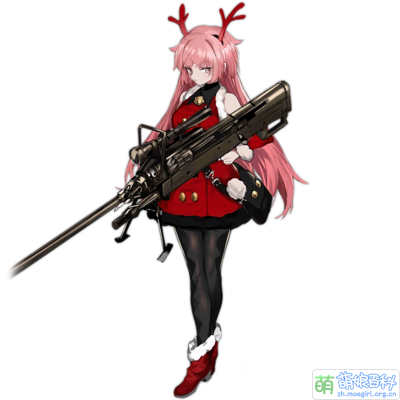 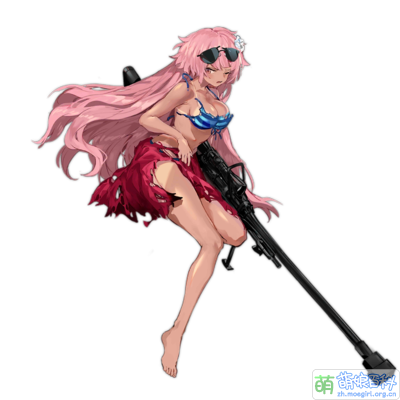 Outgoing and calm, superior performance, but a bit aggressive and arrogant, doesn't listen to others much, but rather talking to herself often. Likes hunting and going for rides, a well-known lonewolf.

The inspiration for this character is mentioned in the official art collection:

ntw-20 as a large-caliber anti-material, I started with a powerful, confident and tsundere doll. But then thought that silence and steadiness suits a sniper better. Not a fan of words, but undoubtedly powerful, not activating her ability when she should (no). The clothing didn't take inspiration from anything, started off from seifuku, the black-pink coloring and not choosing a military uniform are hopes to sense some activity, but if there's a modification might just want to draw a military uniform. Previously saw comments about that why not make her a black as a South African gun, and later on regretted having not done so, sensing the charm of being black. I hesitated a bit on the size of the gun, the original version's too big feeling that it's going to pierce the screen.. so just downscaled it a bit, making the doll standing at 2 meters, but actually somewhere near 1.65?!!? CV's a bit more hardline than I originally thought, but still a fit, actually I originally out of personal preference wanted Touyama [Nao], and it's great that I wasn't heard. (ntw-20作为一把大口径的反器材，开始的思路是強大、自信、傲嬌的人形。不過後來感覺沉默、穩重更適合狙擊手。不善言辭，但是毋庸置疑的強大，該出技能的時候就不出（沒有）。服装倒没有考据，原形是水手服，黑粉的配色和沒有選擇軍服的也是希望多感受到一點活力，如果有改二的話可能就想畫軍裝了。之前看到吐槽南非枪为什么不画成黑人，其实后来有点后悔没有画成黑人，后知后觉感受到了黑皮的魅力，枪的大小我是犹豫了一下的，原版的太大感觉要戳破屏幕了。。于是就缩小了一些，人形的身高就變成兩米了，其實可能1米65左右？！！？cv比我想象中硬了一些，不過還是挺合適的，其實我開始憑喜好指名了東山，沒有聽我的真是太好了。)

Finally thanks to everyone loving ntw, you'll have to go through me if you want to marry her (what (最後感謝喜歡ntw的大家，要結婚先過了我這關（什麼）)

Her illustrator, as shown, gave a detailed description of how NTW is born, including her personality, clothing, and her height perhaps behind only that of PTRD, 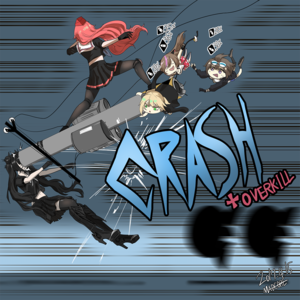 NTW-20 as the dominant high-damage RF has the highest damage value (165) and the highest ability multiplier (8x) amounting to a staggering 1320 points of damage in one hit, forming a team of high-damage one-shot RFs with M99, PTRD . But however, aside from some high-intesity maps, they are usually replaced with other dolls due to the relatively low need for them in ordinary maps and their slow rate of fire.

But as the buffs of HGs received an overhaul as well as the calculation of ability damage, and the bosses of Operation Cube PLUS are introduced,

They have also contributed to the ever-increasing number of auras above Weaver's head. 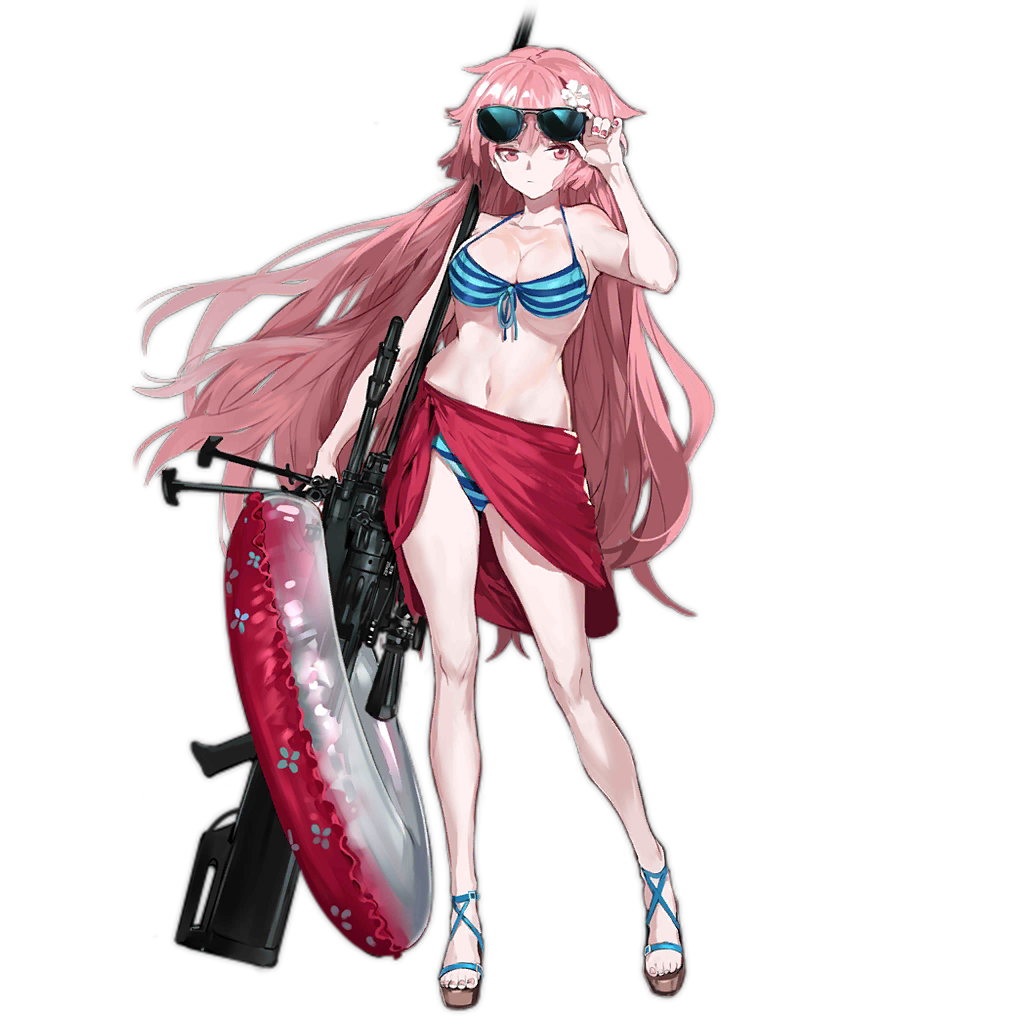