Ribeyrolles is a character from the Tactical SRPG ES game Girls' Frontline and its derivatives developed by MicaTeam and published by Digital Sky. She was introduced on 4 May, 2017.

Ribeyrolles was developed as an automatic carbine/light machine gun/assault rifle by Gladiator of France. This infantry weapon fires a specially-developed 8mm Ribeyrolles round, which is probably the first intermediate cartridge developed specifically for assault rifles. It is yielded by necking down a .351 Winchester casing and fitting an 8mm (0.31 in) Ribeyrolle AP round. This weapon system was developed by Ribeyrolles, one of the designers of the Mle 1915 light machinegun. It underwent trials at the Versailles testing grounds on 6 July, 1918, and a full trial took place at Camp de Chalons from 20 July, 1912 to 18 August. However, the results were not satisfying. The action mechanism was unreliable and was plagued with stoppages, and the ballistic performance of its cartridge did not meet expectations, with accuracy experiencing a severe drop beyond 400 meters. It was too heavy as an infantry weapon, while not accurate and long-ranged enough for a light machinegun, putting this weapon in a stall.

In fact, the idea of having intermediate cartridges were very advanced at that time, albeit appearing 20 years earlier. The primary idea of the military in the WWI-era was still to pursue the long-range effectiveness of rifles, causing military experts at that time to be unable to accept a weapon capable of providing heavy firepower at only 400 meters.

The Ribeyrolles automatic carbine has a wooden semi-grip-functioning stock. The metal parts were produced from steel, with a metal lid at the end of the cylindrical receiver. The front of the receiver houses the barrel, with the cocking handle and the extraction port on the right side of the receiver. The bolt consists of a small-diameter return spring on a guiding rod mounted on a shaft. As with the layout of rifles of that time, a wooden upper handguard is placed on the upper part of the barrel, and is secured to the lower handguard by the protective barrel shroud. These parts are directly borrowed from the Mle 1916 rifle. A wire bipod is mounted on the front shround, and is folded to below the lower handguard when not in use. A rotating selector is mounted to the right of the stock, above the trigger, with the front position allowing automatic fire, the back allowing semi-automatic position, and the middle position engaging the safety. A front-blade rear-notch iron sight is provided, with calibrations from 200 meters to 2000 meters at 200-meter increments. It is fed by a 25-round curved box magazine. It utilizes a direct-blowback system. The firing pin is independently driven by a cam, and fires from a closed bolt. It is compatible with the French M1886-15 or M1915 bayonet. Some features of this weapon (such as the receiver) was later used on the experimental 9mm-caliber STA1924 sub-machinegun. 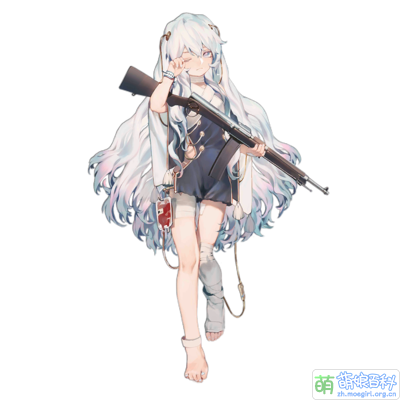 The official blog@少女前线describes Ribeyrolles as the first concept assault rifle.

The debate regarding the earliest assault rifle never ceased, and is not subject to determination here.

But as the concept, experimental assault rifle from the early years of the last century, problems do exist.

As with her French military-like outfit, the blood bag and bandage accompanying her and her sleepy look, the bad luck of getting injured on unlikely occasions, and the fact that she falls even when winning a battle, she seems very unreliable.

The G11 next door still wakes up when she gets damaged, while Ribeyrolles seems unreliable head-to-toe, in a complete state of irreversibility.

But still, Ribeyrolles was indeed unreliable during the tests, with frequent stoppages.

However, she seems to escape death all the time even with her bad luck of getting hurt in unlikely scenarios. Is this her luck, or her bad luck???

Ribeyrolles' illustrator rei made the first direct reply addressing the requests for the personality of Ribeyrolles on 26 August, 2017.

As an answer to the need for Ribeyrolles' personality on ask.

Her clothes is a crude modification based off a patient's clothes (so there should be nothing worn inside [x](She did wear her pantsu). The fabric is connected below her torso, disqualifying her clothes as a [dress]. The wide bands in front of her chest can be detached (as per the picture), so are all tube-type attachments and bandages (according to medical needs).

A typical loli. Barefoot, or it should be said that she didn't have her own shoes at all. A gun that has ceased (production) in the future. Due to numerous defects found in the weapon's design, most of her time in her memory is spent in the infirmary, with few chances of being called to the battlefield.

Has strong doubts and even disdain of her own existence deep inside. The psychology of Ribeyrolles should be considered twisted. Defects in her chip and her system are numerous, therefore she didn't have an [intact] personality, plus that she has few contacts with the outside world, leaving her next to no chances to study. Judging from the psychology blueprint, she should have high levels of dignity with her own goals. But her numerous defeats caused her to fall into confusion about her own position, seen from the outside as a not-so-confident T-doll who cannot become confident.

Due to numerous defects, Ribeyrolles should not have so-called friends, costing her full strength to just earn the affection from the commander. She can get some scents of [companionship] from G11, but the chances of getting hope from this is extremely bleak.

Dreamt about the day when she receives a design improvement, going to the battlefield with a normal uniform as a normal T-doll.

Her creator (mother) has thoroughly explained her personality: Psychologically twisted with self-hatred. Unconfident, and dire for attention. Therefore, it can be seen that Ribeyrolles is one of the few illustrator-designated T-dolls with a full load of negative emotions.

But per her performance in the game, Ribeyrolles did not suffer numerous defeats: Having an AR-effective set of tiles as an AR herself, with a supportive skill oriented around bursts of output which favor ARs, she basically boosts the output of any and all ARs standing on her effective tiles to a horrifying level. Herself being an AR, though not the spine of the entire team in terms of firepower, she became the preferential choice whose firepower is at least better than an HG in the stead of an HG whose damage is not so high but could also support her team.

Some other trivia can be known from her creator's words, Also the bands mentioned refers to the crossed wide white bands in her illustration, while the (as per the picture) is the profile image of this page. As it is from the same creator, her look could be compared with the illustration in-game.

In addition, a very short-but-brutal post was posted by her illustrator at 11:48 AM, 11 October, 2017 which read as: "Who provided Ribeyrolles' clothes: She modified it herself. (利贝罗勒的衣服是谁提供的：她自己改的 ​​​)[5]”. Hinting that Ribeyrolles has an expertise in handcrafting.