T77 is a character from the Tactical SRPG ES game Girls' Frontline developed by MicaTeam and published by Digital Sky and its derivatives. She joined the struggle in 2018.

The T77 is introduced in 1985 (Minguo Year 74) as a prototype similar to the MAC-10 Submachinegun, but was not assigned a designation, instead as a "New Taiwan-made 9mm Submachinegun". The prototype is substantially different from the T77, and retained the open-bolt design and blowback operation of the MAC-10, with a small size and high rate of fire, albeit with low accuracy.

The T77 introduced in 1991 has a yellow FRP handguard, and a grip whose rear part is also made of the material. The earlier U-shaped notch was changed to an aperture adjustable to windage and range, and had the barrel fixed by a screw similar to the Israeli Uzi. It also had a lengthened barrel, which, with the relocation of the center-of-mass, raised the T77's range and accuracy, and facilitated maintenance and part-switch.

The mass-production model of the T77 with orange FRP handguards did not surface until 1992, but later models had a black rubber handguard instead. It was accepted into the Taiwanese Armed Forces as a standard-issue weapon.

The T77 has a layout similar to that of the Uzi, and uses an open-bolt design with a hollow bolt, with the magazine housed within the grip. To enhance stability, the T77 has the center of mass on the grip, to help the shooter control the weapon. Two slanted slots are in place above the barrel to counter muzzle rise, with ribs on the left side of the receiver to house dust to prevent potential jamming. There are two safety mechanisms on the T77, namely a safety button above the trigger that mechanically disables the trigger when engaged, and a selector on the left side of the weapon to select either the semi- or the full-auto mode.

The charging handle is cylindrical in shape with a slot, similar to the Uzi, but due to the small cross-sectional area of the handle at the front, it cannot be comfortably pulled back with the lower part of the hand, instead by the thumb and the index finger of the left hand. If the user wishes to exert more force, the weapon have to be pointed downwards at a 45-degree angle, which also affects combat readiness as the barrel is not pointed to the front. The firing mode can only be changed with the thumb of the right hand which controls the selector to switch between semi-auto and full-auto. Anchor points for the sling is circular in shape, which, compared to the traditional rectangular ones, are problematic due to the difficulty in maintenance, low structural strength, frequent noise when impacting the receiver and instability.

Since the magazine is housed in the grip, reloading can be executed quickly to reduce reaction time. However to facilitate this, the grip is perpendicular to the receiver, which is uncomfortable compared to semi-automatic pistols or assault rifles if held in hand for a prolonged period of time. The charging handle and the bolt is mechanically fixed together with a screw, therefore the charging handle moves back and forth as the bolt travels, which further complicates weapon control. At first the T77 had a telescopic wire stock similar to the MAC-10, but was removed due to structural weakness, inability to retract into the weapon and difficulty in maintenance. Later a folding metal stock is used on the weapon, but however due to the retaining of an angle between the receiver and the stock when the latter is folded, it created difficulties when holding the weapon with the left hand. Even though that the stock can be used as a foregrip when folded, due to how the stock is not entirely in line with the side of the receiver, the grip-force may deviate to the sides when firing, affecting firing accuracy.

The T77 doesn't need any tools to have the barrel changed, requiring only a press on the barrel catch to detach the barrel from the weapon, which facilitates maintenance. If the barrel wears out in the field, the user can change the barrel on his own without the need to send the weapon to maintenance. The current model of the T77 uses a black rubber forearm for its handguard, possibly due to its high friction and adaptability to adverse battlefield conditions. A protrusion is located to the front of the handguard to help the shooter hold the handguard in a correct way to reduce burning incidents. The barrel is capable of accepting silencers for special operations.

Arsenal No. 205 of Taiwan once sent the T77 to the Special Service of the Military Police for performance testing: The average jamming rate of the T77 in a 6,000-round firing cycle is below 0.2%, with most of the jams being able to be fixed in 10 seconds, it has also passed tests such as firing 300 rounds cyclically, in high/low temperatures, in salt water, etc.

However, the T77 is still not suited for assault troopers, for that: 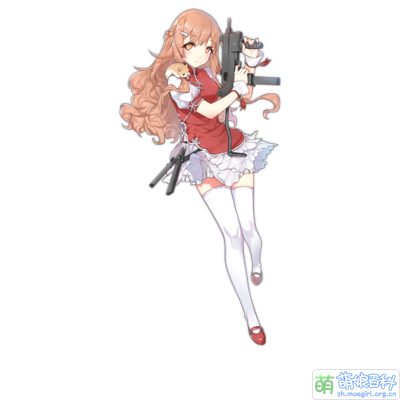 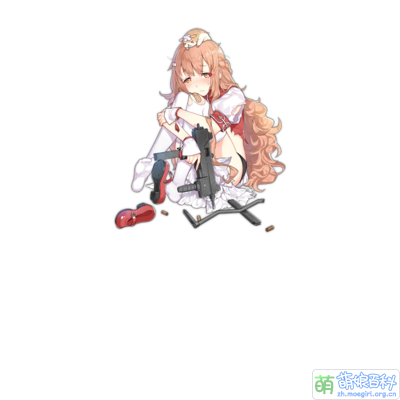 However, the Taiwan server never made T77 live, all the way until April 27, when the Mandarin server introduced her as the login reward for May.

And as a comment, her illustrator posted that he finally got the chance to have a daughter in this game.[1]