Ballista is a character from the tactical SRPG ES game Girls' Frontline developed by MicaTeam and published by Digital Sky and its derivatives. She joined the struggle on February 8, 2018.

The Ballista is a bolt-action sniper rifle developed by FN.

The US Special Operations Command (or USSOCOM) announced the Precision Sniper Rifle project, to provide its special forces with a new sniper rifle lighter than .50-caliber rifles, able to be carried alone, and with a greater range and firepower than 7.62mm rifles, to replace the Mk13 and the M24 in service. Criteria specified include:

2. Manual-action or gas-operated semi-automatic, but capable of supporting ambidextrous operation.

4. Presence a MIL-STD-1913 Picatinny rail on the 12 o'clock (top) side, with enough length to mount daylight optics and nightvision devices such as the AN/PVS-22, -26, -23 and the SU-232/PAS, all while supporting the installation of an aperture back up iron sight.

5. The weapon's zeroing is not affected when suffering impacts.

6. Presence of Picatinny rails at the 3 o'clock / 9 o'clock (both sides) to mount accessories such as laser pointers.

7. Capable of field disassembly in under two minutes and reassembly within the same amount of time.

8. Incorporation of a quick-detach barrel without further adjustments after barrel change, with the barrel change taking no more than 20 minutes.

9. A total length of no more than 52 inches, or 40 inches without lengthening accessories (e.g. silencers)

10. A weight with the Picatinny rail at 12 o'clock and a 5-round live magazine below 18 pounds.

11. A 10-shot group accuracy of 1.0 MOA between 300 to 1500 meters regardless of whether the weapon is shoulder-fired or stabilized on a platform.

Though not limiting the type of action and the caliber, an accuracy of 1.0 MOA at 1500 meters is what any semi-automatic rifle cannot guarantee, prompting all the participating firms to opt for the .338-caliber cartridges, which have better ballistic performances over the 12.7mm rounds, in addition to designing the weapon as bolt-action.

Eventually, the MSR of Remington won the competition, making the Ballista of FN, the M98B of Barrett, the Finnish Sako TRG-42, the Tactical-2 of Sig-Sauer, the British Accuracy International AWM338, the Ashbury ASW338, the Armalite AR30 and the PGM of Drake Industries of France collectively failures of this competition.

However, among all the rifles participating, only the MSR and the Ballista is a weapons system specifically designed for the competition, while all other rifles are already marketed, putting much attention on the two. The Ballistica is the lastest of all PSR-project rifles to be put into market, without prototypes for all proposed calibers (only the .338 Lapua Magnum-chambering is put into the market, the .308-caliber variant is financially costly while the .300 Winchester Magnum-chambering variant "only existed in the manuals"). What's worse is that the Ballista did not incorporate a MIL-STD-1913 Picatinny rail, but rather an incompatible rail system made by FN itself, which, though not posing a significant problem due to its detachable nature, it made the weapon an outcast from the well-marketed MSR and other combat-proven rifles, making it difficult to receive adequate positive comments and prospects. The weapon was also presented at the 2012 SHOT show, but did not sell well.

The Ballista uses a Mauser-type rotary bolt action and a 26-inch free-floating barrel in the standard model, which was grooved to improve heat dissipation. The muzzle can accept flash hiders or silencers. Tools for barrel-change can be carried with the weapon with the help of the handguard, with the barrel-change process taking only 2 minutes.

The receiver is made of steel, with the hollowed, segmented handguard being stamped from aluminium alloy. The handguard is octagon-shaped, with screw-ports on the top and the sides to mount various rails. A grip can be installed below the handguard where it connects with the receiver, to facilitate shoulder-firing when the user cannot unfold the bipods. The weapon uses a magazine release button found on AR-style weapons.

The weapon needs to be raised to reload due to the length of the 10-round magazine (while the MSR doesn't). The stock is adjustable in three ways (cheekrest, recoil-dampening pad and monopod) in addition to being foldable. The cheekrest of the weapon blocks the bolt and extraction port when the stock is folded, acting as a safety. The weapon also has a grip safety in place. The trigger pull-force of the Ballista can be adjusted, with various slots and hollows in the weapon to further reduce its weight.

Barrel aligned with the user's shoulder 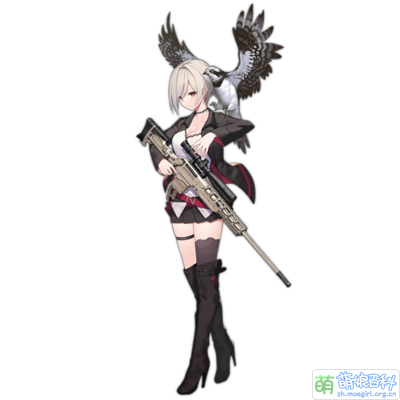 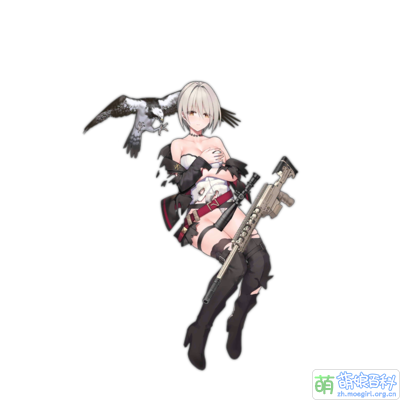 Ballista was leaked early when Girls' Frontline celebrated its first anniversary from the celebration picture posted by her illustrator, however most of the focus was placed on then-already-live FAL and FN57, while the two on the right simply served as early teasers.

However, this changed as Ballista went live, spawning speculation that the red-haired doll is not far from going live. Furthermore, the word on her clothes stood for the city in which FN is based, Herstal.

As is the case with FAL, there's a Shikra-shaped biomechanical pet next to Ballista, which lands onto her head when a battle is won.

According to her illustrator, Lin is an osprey. Normally ospreys prey on fish, but occasionally they hunt down other birds, rats or snakes as additional food. Though an osprey, it is biologically not so close to eagles as falcons, making it technically incorrect to call her an eagle.