S.A.T.8 is a character from the Tactical SRPG ES game Girls' Frontline and its derivatives developed by MicaTeam and published by Digital Sky. She joined the fray on September 22, 2017.

When it comes to the S.A.T.8 (short for Semi-Automatic Tactical, 8 shots) series of weapons, there surfaces the need to introduce a persistent dream of developing a shotgun of H&K.

In the 1980s, HK-USA (the US subsidiary of H&K) started a merger with Benelli, selling large numbers of the MP5 series of SMGs and Benelli shotguns to the US markets (such as the M1014 adopted by the US armed forces). However, the joint venture did not progress further without any joint development of a new shotgun. After more than 10 years as one, Benelli broke free from HK in 1996, resulting in the absence of a favourable shotgun in H&K's product list (The CAWS proposed by H&K in 1982 was turned down in favour of the ACR project). Still in 1996, H&K formed cooperative relationships with Italian shotgun manufacturer FABARM, and a new family of shotguns were introduced two years later as the result of the joint venture-the HK FABARM FP-6 series, while the S.A.T.8 is one variant of the FP-6 series.

The FABARM company was not a famed company at first. Before its cooperation with HK, it manufactured traditional sporting/hunting shotguns, such as the BIG GAME series, while the FP-6 was positioned as a pump combat shotgun, with pronounced features for military/police use. The FP-6 and the S.A.T.8 are both listed under the "law enforcement" tab on the official site of FABARM, making S.A.T.8, a semi-automatic variant of the FP-6 with an enlarged magazine a whopper combat weapon.

In the introduction picture, the S.A.T.8 "is like" an improved variant of the FAST-20, but actually the S.A.T.8 was made to replace the "semi-automatic" shotguns made by slightly modifying the bolt of the FP-6, such as the FAST-20/-14. (note that the figures in the names "FAST-20" and "FAST-14" refer to the barrel length in inches.) Due to how the FAST-20 is equipped with a FABARM in-house "automatic magazine" feed system, users have to mount a special tube magazine with a capacity of 8 rounds to enable the semi-automatic function of the FAST-20, while the weapon is essentially an FP-6 with a charging handlke mounted by the extraction port without the long magazine, which, when compared to the Benelli M3 or the even older SPAS-12, makes this kind of semi-pump transition rather complex. Though the design lowered the production cost when simultaneously manufacturing semi-auto and pump-action shotguns, it also made the FAST-20 bear an uncertain position in the market (civilian pump-action/military police semi-auto), with the risk of illegal but easy conversion to a semi-automatic shotgun. The FAST-20 was soon replaced by the semi-auto-only S.A.T.8. The handguard of the S.A.T.8 looks identical to that of the FP-6, but it is fixed in place and the weapon is capable of semi-automatic fire only.

As a shotgun developed with H&K personnel, the FP-6 and its variants indeed surpassed some traditional shotguns in some aspects. As a tactical weapon, the S.A.T. 8 is built from lightweight ERGAL 55 alloy (for its receiver) and ABS plastic (for the handguard), and both parts have the MIL-STD-1913 tactical rail system installed, capable of accepting any and all optics and accessories compatible with the system. A set of ghost-ring iron sights is also provided. Some of the S.A.T.8's equipped with a heat-dissipating barrel shroud when sold. The FP-6 used the "Tribore barrel" developed by HK, divided into three parts with different bore diameters. The first part is cone-shaped, spanning a length of 10 cm, with an internal diameter of 25mm graduating to 18.8mm, capable of mitigating recoil felt at the moment of fire. The second part is a quasi-cylindrical barrel 35 cm long, its bore diameter starting from 18.8mm to 18.4mm, which raises the muzzle velocity of the rounds. The final part includes an integrated cylindrical 3/4 choker specifications may differ due to different models), to improve shot spread (the average spread of a 60-round group of lead slugs is 5.04 cm, which is highly competitive among shotguns of the same type and caliber. A breaching muzzle is provided on virtually all the S.A.T.8's capable of breaching locks. It can also be detached and replaced by at least 5 different models of muzzle devices. The stock of the S.A.T.8 has a rubber recoil-dampening pad to make firing comfortable. The trigger force is non-adjustable and the weapon lacks a short-barrel variant (while there are short-barrels among the FP-6 family and its pump-action variants, such as the MARTIAL series of the STF-12 family).

The SAT-8 uses 23/4 inch or 3-inch 12 Gauge shells, using a patented semi-automatic shotgun gas-operated automation mechanism developed by HK Fabarm(an improved short-stroke piston system). The highlights of the system lies in a polymer compression ring around the tube-shaped magazine, positioned between the handguard and the piston. The ring is compressed by pressure when a round is fired, making it travel at a constant speed backwards regardless of the type of ammunition. The larger the barrel pressure, the higher the friction between the ring and the outside of the magazine, and therefore higher friction is applied to the entire automation system. This effectively controlled the backflow of gas, prevents too-high pressures from building up while making the entire automation cycle more controllable, smooth and reliable (it is worth noting that the automation of the mechanism is beneficial to bolt reliability if controlled within a certain velocity margin. Making it too fast or too slow risks jams or cessation of feeding), and makes the weapon adaptive towards different types of ammunition. 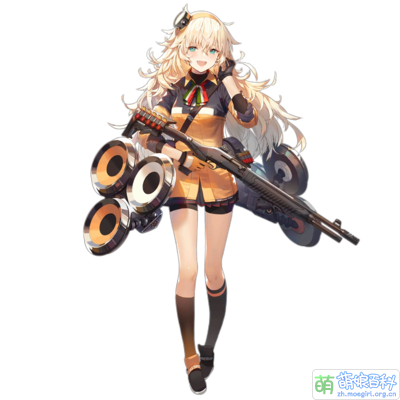 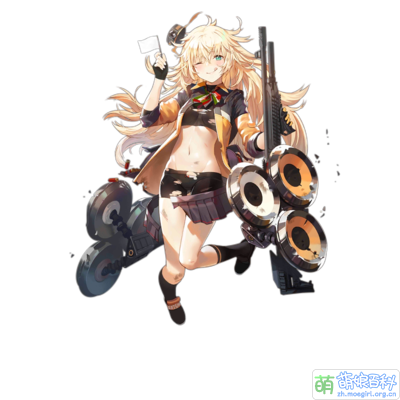 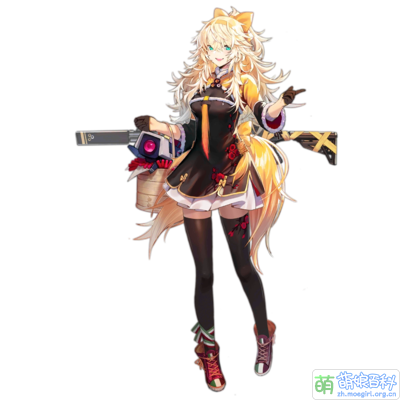 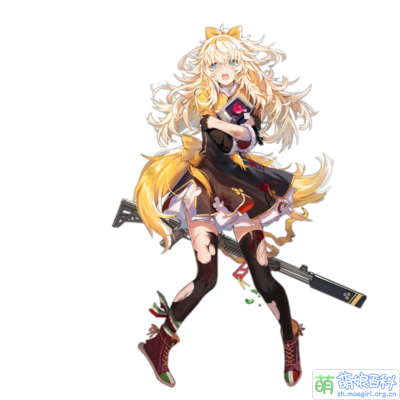 “
In the world of Girls' Frontline, she's a very lovely and woman-like T-doll! Exceling in Italian and German cuisine, she couldn't resist anything resembling little animals. To her, the Dinergates of Sangvis are so cute that she couldn't take the shot! Though aptly prepared for any situation, once something sudden happens, she expresses her side without calmness. Ready to take her to the command center? See the detailed description below! (在《少女前线》的世界中，她是一名非常可爱且充满女子力的战术少女！擅长意大利料理，德式料理也不在话下的她，无法抗拒各种小动物形象的事物。对她来说，铁血方的兵蚁也是可爱得很难下手！虽然会对任何情况做好万全准备，但是一旦遭遇意外，就会露出失去冷静的一面。准备好带她回指挥部了吗？来看看下面的详细介绍吧！)
”
— T-doll-pedia: 5-star SG "S.A.T.8" (战术人形百科：五星霰弹“S.A.T.8”)[2]

Her illustrator NIN released the picture of S.A.T.8's overall appearance and equipment in their entireties on February 14, 2018, accompanied by large amounts of text to describe (The following (translated) content is entirely original, from the illustrator herself )

“
Immediately thought about the romantic sense of Italy when I took the commission for S.A.T.8. Just want to draw an open-minded enthusiastic kid kept thinking about it over and over, and added a lot of elements that I personally thought are energetic and romantic. That's it. In short, it suits me well. It'll be best if everyone can like this kid.


The clothing takes inspiration from some grocery stores and gas stations' work garments. The Italian ribbon surrounded by Vatican orange. Thought that there's a sense of romance this way. Never forgot about protecting her sports shorts when wearing girlish skirts, with well-placed defenses. Coupled with the sneakers and short socks, full of energy. The white color up her chest and the gloves are magic stickers. The smoothly-outlined shield won't keep people at a distance.


The socks and the orange shield and the octaple teeth are hints about the Fabarm-exclusive compensator and the two exclusive chokes. The "lion" nickname also has links to the logo of its manufactures. Finally a bit of dark color to keep the atmosphere low.
*Inside the bright energetic clothes are steady dark-colored garments.

“
S.A.T.8 is a born gentle and cautious kid, but being simply so is just too boring. Before becoming a T-doll, she's an A-doll dedicated to fill gaps on different posts, from selling cookies on the streets to grocery stores to high-end hotels, feeders, kindergartens to personal baby-sitters, a true workaholic. Came to Grifon to report in with all the understandings of life and talking skills learned from various posts.


The design of the T-doll is somehow connected with her own past and the history of her gun. The thick, naturally-curled golden hair looks gentle, and adjusts the curls according to humidity in the air, with a gentle smile and squinty eyes, makes people think twice about what she says. Thinks before she says, though a play-girl in ordinary circumstances, she retreats the moment the bottom line is exceeded. A dog person actually.


Has no prejudices in love, won't dislike entirely even if the commander's homosexual or having other weird hobbies. Though not so high in her height, she does have a big-sister-esque personality. The chest often pressed by body-tight underwear actually has something.
*Specialty: Her hair gets more messy as she tries to comb it.

The pan-shaped structure at waist level depicted in the illustration is not a 3-wheel wall ascender, nor a reflecting magnetic drum, and is never that pan in PUBG.

Referring illustrator NIN's words, "Wanted to design a pan-like shield to enhance her cooking skills, and there's PUBG a few months later all out of a sudden. So embarrassing. Actually a vectorable, detachable shield supported by three hydraulics. (那個時侯是想設計一個像平底鍋的盾加強一下廚藝力, 幾個月之後吃雞突然出現了, 真尬, 實際上是一個由3條液壓支撐的可轉向可分離盾牌。)"

SAT8 excels in Italian food, especially pizza, as seen in her adjutant lines, which is in stark contrast to a certain Italian friend who only knows to eat.

At the same time she loves small animals, her big-sister figure expressing her gentle personality, probably able to capture quite a handful of commanders'hearts. That is, if they can get her. 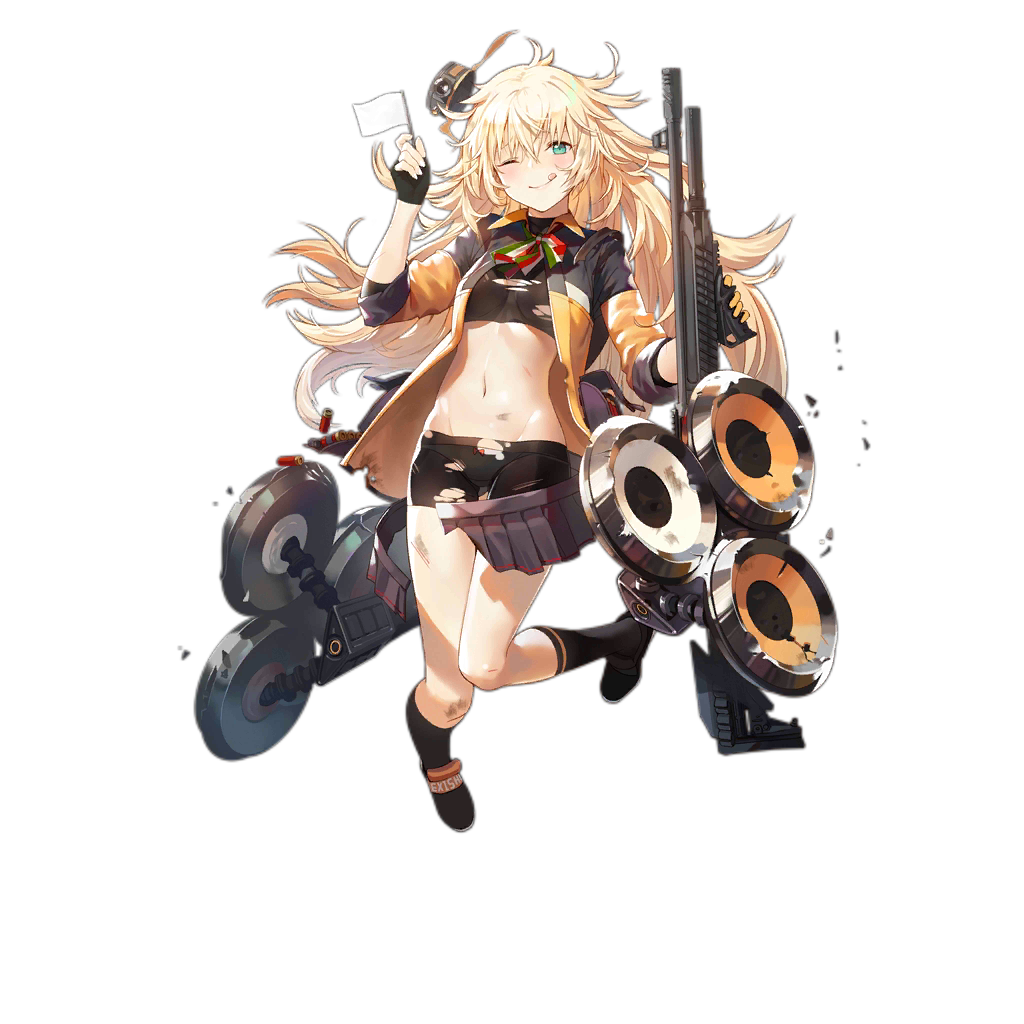