P38 is a character from the SLG game Girls' Frontline developed by MicaTeam and published by Sunborn Games and its derivatives.

The Walther P38 is a 9mm-caliber semi-automatic pistol developed from the Walther AP by Carl Walther GmbH in the 1930s for the Wehrmacht as its service pistol. First intended to replace the costly Luger P08, the P38 failed to replace the former even until the end of World War II.

The concept of the P38 was first accepted by the Heer in 1938, however, samples were put into production only at the end of 1939. Walther began building these "Test" pistols at its Zella-Mehlis factory, and these pistols have their serial numbers beginning with the number 0. The third series of pistols had an external hammer, which finally solved the problems for the Heer, and were put into mass-production in the middle of 1940.

Walther later introduced test models firing .45 ACP and .38 Super rounds, but these were not put into production. Models chambered for the 7.65x21mm and .22 LR rounds were also built and sold. 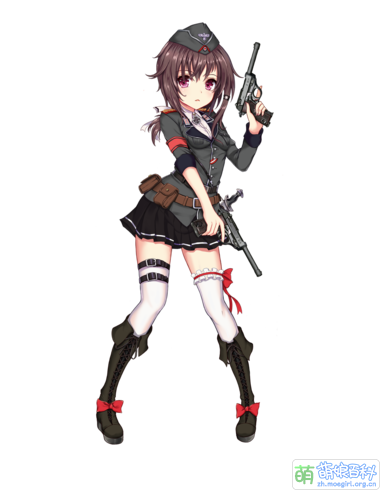 Gr MP5: What were you arguing with Ms Kalina? Thought we were trading with gems?
What 1P 2P?
M9: Eh hard currencies like gems are for use between humans.